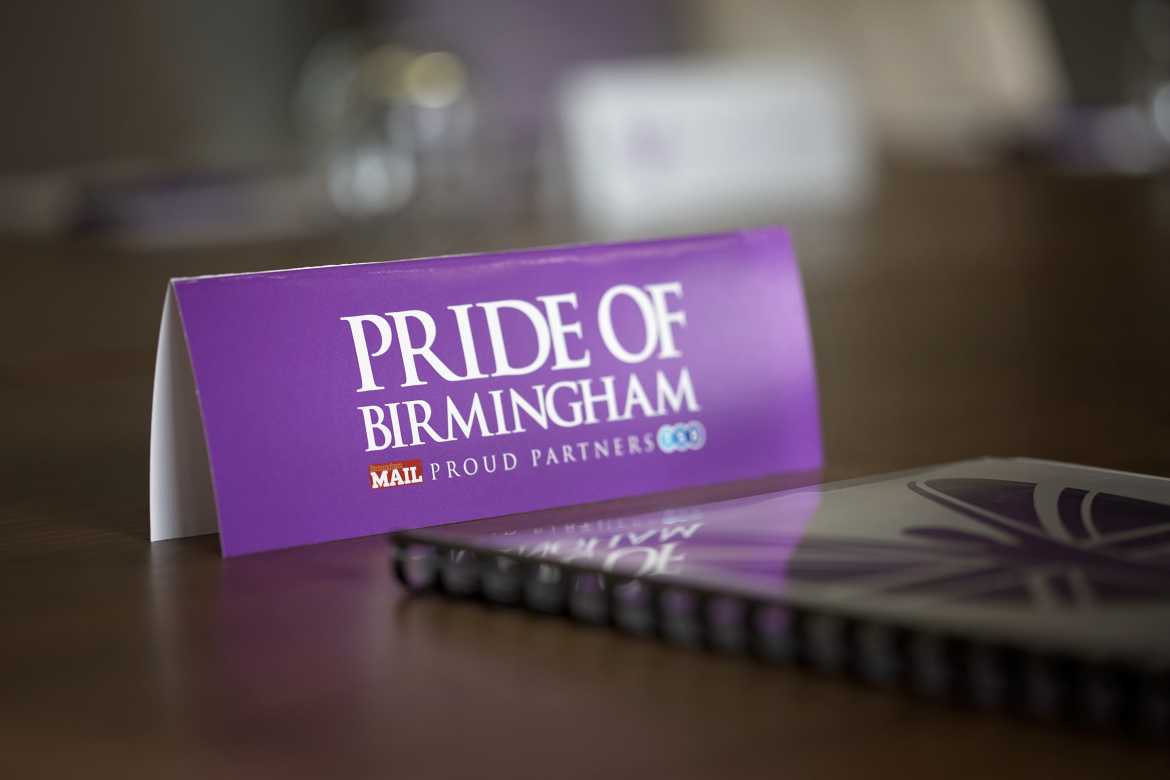 We Have Our Pride of Birmingham Winners

We knew that Birmingham was full of incredible people and the nominations came in thick and fast throughout January. Our team of researchers whittled the entries down to five in each category leaving today’s panel the unenviable task of picking our winners. As always each panelist fought fiercely for their favourites and Black Sabbath legend Tony Iommi admitted that he’d already changed his mind three or four times in the car journey to the hotel.

After much to-ing and fro-ing we reached a decision in each category and the winners are truly incredible. Jamelia described the judging as ‘such a gorgeous, heartwarming and humbling afternoon’. She added ‘So proud to be a Brummie!’ It was also the first work outing for her six week old baby True who is now our youngest ever panelist! Paramedic Darren who is featured in the BBC fly on the wall documentary Ambulance told us that he ‘wished he could give everyone an award’. We do too Darren!

All of the finalists will be considered for a Pride of Britain award and will be honoured at a ceremony in March.

Paul Cole is Editor of the print editions of the Birmingham Mail and Sunday Mercury, and has worked as a journalist for more than 40 years. A wide-ranging career has also seen him work as a crime reporter, features specialist, travel editor and rock and roll writer. He has contributed to a number of books on music, edited Gladiators News for LWT, and for many years was a BRIT Awards judge. Since the Pride of Birmingham Awards were launched in 2014 he has masterminded coverage of the event. His most memorable assignments include dining with Michael Jackson, taking ZZ Top to the barbers and watching Live Aid backstage with Bob Geldof.

Padraig is the Director of Customer Service Operations for TSB. He has been in his current role since 2016 and is responsible for leading and setting the strategic directions for over 1,500 TSB partners. Padraig has worked in the banking industry for almost 20 years and has been with TSB since it launched back onto high streets in September 2013. He has lead large operational teams through significant change with brilliant results and is passionate about inspiring others. Padraig works closely with the Pride of Britain partnership and this is the second year he has taken part in the judging for Pride of Birmingham.

Sameena is the friendly ITV Central newsreader with the big smile who loves hosting events. She's been on TV in the Midlands since 2001 and during that time, she's reported on thousands of stories, presented many outside broadcasts, and interviewed guests from all walks of life. She's also won the RTS Best On Screen Personality three times. Away from the day job, she's an ambassador for Breast Cancer Research and The Princes Trust, and she's a patron for Breaking the Silence, a domestic abuse charity. She also regularly speaks at schools and colleges, encouraging the next generation of broadcasters.

She's also a proud mum 24/7 and in her spare time she squeezes in anything that helps keep her positive!

Black Sabbath guitarist Tony Iommi is synonymous with heavy rock, his innovative dark riffs are acknowledged to be the beginning of what became heavy metal. Sabbath have sold in excess of 100 million albums and their most recent album went to number 1 around the world including the UK and USA. They played to vast crowds live, selling over 1.6 million tickets on their last global tour, concluding with 2 shows at Birmingham’s Genting Arena. Tony is in the UK and US Rock n Roll Hall’s of Fame, has two Grammy’s, his autobiography was a New York Times bestseller, and he has a star in Birmingham’s Broad Street. Tony has always been a keen supporter of local charities and is patron of Wythall Animal Rescue.

Marcia won our Pride of Birmingham Lifetime Achievement Award last year and now returns as a judge. Her daughter Letisha Precious Shakespeare was innocently murdered in a drive by shooting in Aston Birmingham. Since the murder Marcia has worked tirelessly to breakdown the war on violence crime, through educating young people on Joint Enterprise, Choices & Consequences and the real-life effects of

being an innocent victim of a high-profile murder case, in partnership with WMP. Marcia has a charity The Precious Trust which provides prevention resources by highlighting Healthy Relationships and Decision Making to young girls and women

who are affected through Domestic Violence, Sexual Exploitation and Violent Crime.

Hailing from Birmingham, Jamelia embarked on her career as a singer- songwriter at the tender age of 15. With 7 Top 10 singles, 2 Gold Albums & one Double Platinum in the UK alone, Jamelia’s international success solidified her position as one of the UK’s most successful black music artists. After 10 years in the music industry, Jamelia decided to try her hand at television, achieving great success as a panelist, documentary author, presenter & talent show judge. She has also followed her passions for acting, gaining starring roles in both TV & Cinema. Jamelia is mother to three lovely daughters, 16 year old Téja ,11- year-old Tiani and 6 week old True, who she describes as her ‘Magic girlz’. Jamelia aims to continue to advocate for and empower girls & women like herself.

Darren is a 31 year Brummie lad who has lived in Birmingham all his life, apart from when he went gallivanting around the world. For a living he turns up to help people when they are having a bad day and tries to make things better for them – Darren is a paramedic. Recently he appeared in a BBC show called ‘Ambulance’ which was really well received, giving insight on what being a paramedic is like. He’s a big film geek, stays active but also loves food way too much!

Mum of inspirational Burntwood teenager Stephen Sutton, who moved the world with his message to live life to the full. Stephen, who died at the age of 19, started fundraising for the Teenage Cancer Trust after he was diagnosed, and brought in

more than £5 million. Since his death, Jane has continued the work he started,

tirelessly raising funds and awareness of teenage cancer. She has climbed Mount Kilimanjaro, run the London Marathon, and leapt out of airplanes in a record-breaking tandem skydive. In 2016, Jane was named as a Point of Light by Prime Minister Theresa May for continuing her son’s legacy. And in 2014, she

accepted the first-ever posthumous Pride of Britain award on behalf of her late son.

For an individual or group of people who have worked together in partnership as a force for good in their local community, improving the lives of people around them. This could be anything from supporting young people to thrive to bringing communities together to create something special. The winner or winners will have galvanised the support of the people around them to make a difference.

For tireless and inspirational charity fundraising, aged 16 and over.

To reward a young person aged 15 and under for inspirational charity work.

For police, fire, ambulance, paramedics or air, sea or mountain rescue who have gone beyond the call of duty.

For adults who risk their own safety to to help others in danger.

For battling against the odds to help others, or putting themselves at risk to save someone in danger.

To recognise far-reaching achievement, possibly on a national or international scale.

For achievements not covered in other categories, such as inspiring carers, campaigners and members of armed forces.

For a person whose example has been truly inspirational. It is named after the late teenager who taught the world to live life to the full.