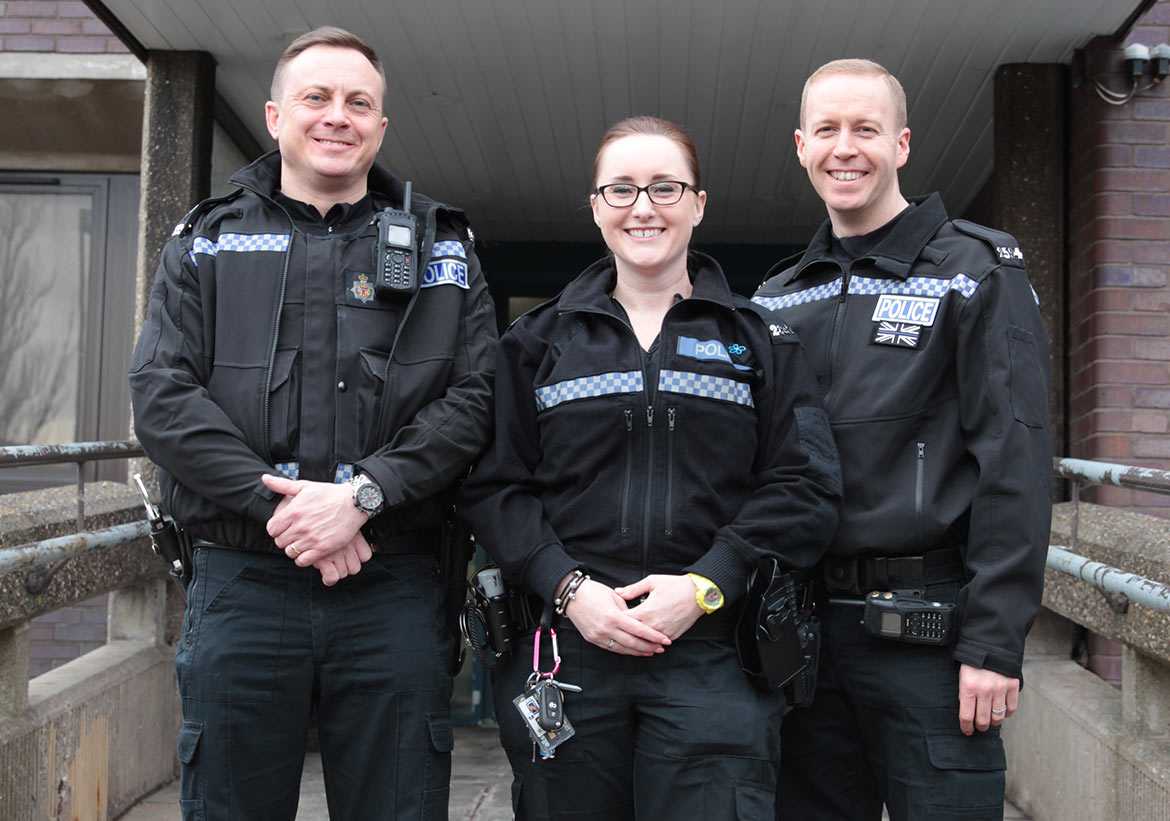 Northumbria officers Sgt Elliott Richardson and PCs Sarah Currie and Michael Otterson were on duty in Gateshead when they received a call about a man who had made threats of violence. After searching for him, they spotted him entering a pub, wearing body armour and carrying a rucksack. When PCs Currie and Otterson opened the door to the pub, they were confronted by the man holding a handgun.

They tackled him to try and disarm him, and were quickly joined by Sgt Elliott. There was a violent and lengthy struggle, and the man fired the gun in the melee. When they finally overpowered him, they discovered a haul of weapons in his backpack, including another gun, a crossbow, throwing knives and petrol bombs. The man later said he was intent on attacking a police officer as he thought it was the only way he would get treatment for acute mental health issues.

PC Otterson said he feared he would be killed in the incident. He said: “I was absolutely terrified. For a brief moment I thought I’m not going home tonight. I won’t see my kids again or my wife. You just think if we hadn’t been there the situation could have been a whole lot different. He was there at a busy pub with all these weapons, you don’t like to think what would have happened.”

Sgt Richardson added: “I saw the knives in his body armour, I saw the smoke grenades and the crossbow. This guy was kitted for war."

Home secretary Amber Rudd told us: “It’s because of the instinctive actions and remarkable heroism of PCs Currie and Otterson and Sergeant Richardson that a horrifying incident was stopped and an imminent threat to public safety was averted.”

But PC Otterson said they were just doing what any other officer would have.

Speaking of his pride at winning the award he said: “It means an awful lot to be recognised by the public we serve. I don’t feel that I did something that any officer serving Northumbria Police wouldn’t have also done.

“I feel proud and especially privileged to serve alongside officers such as those I was with on that day, which is what gives Northumbria its place amongst the best UK policing has to offer.”

And Sgt Elliott Richardson added: “I’m honoured to be nominated for this award along with Sarah and Michael and what we faced that day shows what police officers do daily to keep the public safe.”

While PC Currie said: “I am incredibly honoured to be presented with the award. Without Michael, Elliott and my colleagues the outcome may have been vastly different. The recognition is greatly appreciated for just doing our job and I am very humbled by all the support we have received.”

Brave, quick thinking and calm – this really was policing at it’s very best.