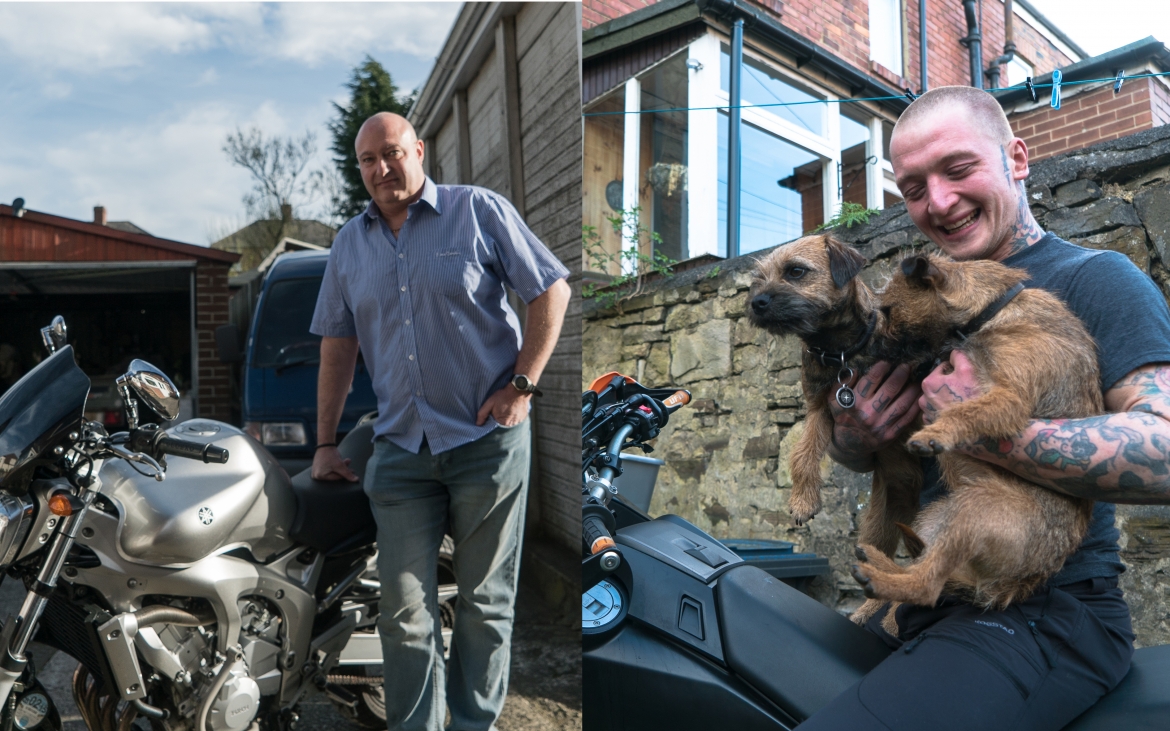 Off-duty highways officer Peter Senior was having a coffee at a roadside coffee shop while Adam Tomlinson was driving home from work, when a motorcycle collided with a car on the A167 near Spennymoor, County Durham.

The 52-year-old rider was thrown into the air and the female motorist was left trapped as the bike embedded itself in the driver’s side of her car. The force of the impact caused first the motorbike and then the car to burst into flames, next to a petrol station.

Peter immediately ran over to pull the woman from the car, before joining Adam, who had rushed to the aid of the biker, who was seriously injured and lying next to burning wreckage.

Despite the very real danger to their lives both Peter and Adam stayed with the victims until the air ambulance teamed arrived to save them.

Peter told us “I remember bystanders shouting ‘you are going to have to move, you are going to have to leave him or you will all die’. But I wasn’t going to leave the guy.” The motorcyclist Dickie Allaker, was too seriously injured to be moved far, so they tended to him until paramedics arrived, despite the proximity of the fire. On the Injury Severity Scale - an established medical score which identifies 15 as a major trauma and 75 as unsurvivable – Mr Allaker was given 57.

Mr Allaker, had suffered multiple fractures and internal injuries and spent two and a half weeks in an induced coma.

He said: “I should have been dead. Everyone was screaming and shouting and saying it was going to explode. Everyone was saying ‘get away, get away’.”

He added “ Adam was first on the scene, comforting us while the fire was blazing on behind. Everyone was screaming and shouting and saying it was going to explode. Everyone was saying ‘get away, get away’ but he stayed to comfort me and do first aid even though his back was getting burned. He was very brave. He's only 19.”

“Everyone pulled together that day – I’m very lucky. I could very well have been dead. They told me if it happened five years ago I would probably be dead and ten years ago I would definitely be dead. I’d like to thank everyone – Adam, Peter, the paramedics.”

Mr Allaker found out the identity of Mr Tomlinson after discovering his mother works as a scrub nurse in the University of North Durham Hospital, where he is currently a patient.

Following the crash Mr Allaker, who has been riding bikes since he was 17, was airlifted to James Cook University Hospital in Middlesbrough with a broken back, two broken legs, a shattered pelvis, a broken arm and internal injuries including damaged kidneys, a torn aorta and bruising.

This was an act of extreme bravery and both Peter and Adam are worthy recipients of our Outstanding Bravery Award.