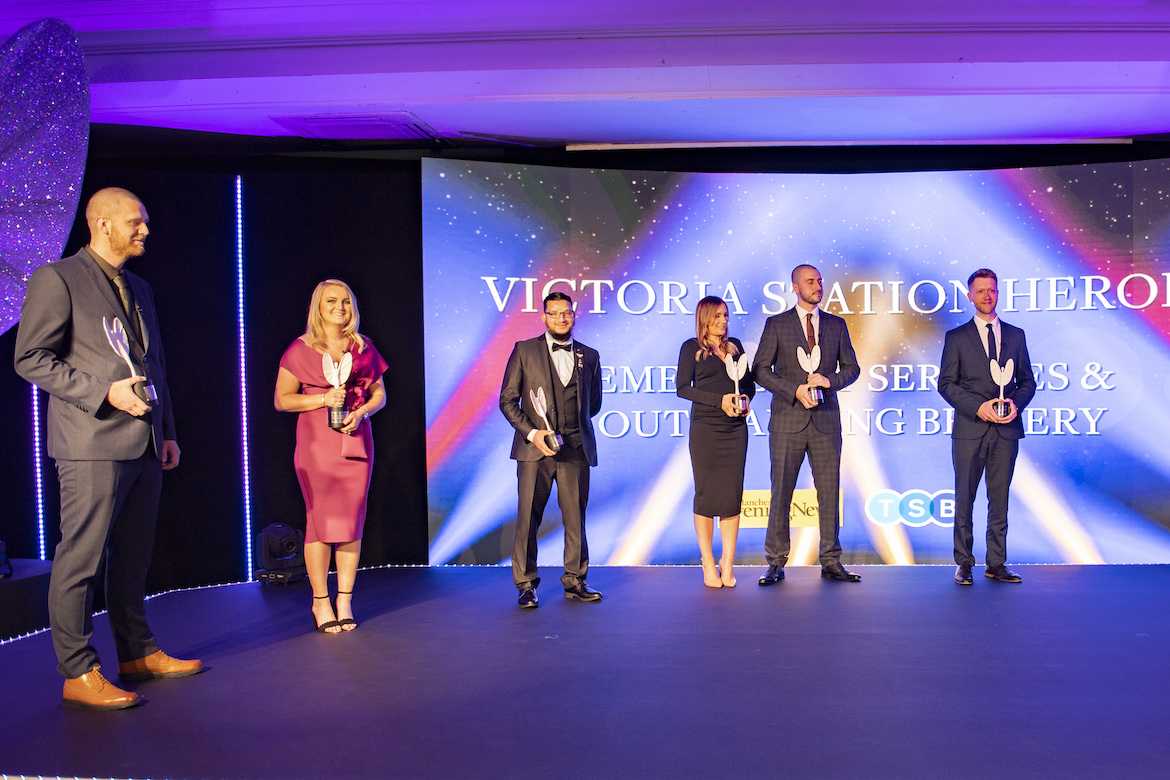 Mayor Andy Burnham hailed police officers and Metrolink staff who tackled a terrorist knifeman at Victoria Station as “heroes”.
He told them he was presenting their Pride of Manchester Emergency Services and Outstanding Bravery Awards on behalf of all of the people of Greater Manchester.
Sgt Lee Valentine was on patrol at the station with colleagues Marsha Selby, Ashleigh Williams and Tom Wright when they heard the screams of a couple who had been stabbed.
Without thinking of their own safety, they ran towards the attacker and wrestled him to the ground, with the support of Metrolink Travel Safe staff Adam Ward and Miah Uddin.
Sgt Valentine, who received a stab wound to his shoulder during the incident, said: “We had no idea what we were running towards when we heard the screams. When we saw the man wielding a knife, instinct took over.”
PC Selby added: “Adam and Miah didn’t have any protective equipment, just a high-vis jacket, but they put themselves right there next to us. We would have struggled without them. They were very brave.”
The attack, on New Year’s Eve 2018, took place just yards from the scene of the Manchester Arena bombing.
In a special message played to the winners in the Pride of Manchester show, TV presenter Piers Morgan told them: “You guys are the absolute definition of the word hero.
“I cannot imagine the courage it must take to risk your lives the way you did, with no thought for your own safety.
“You didn't know how many attackers there were, what weapons they may have had, or even if there was a bomb, and you just ran into danger, when everyone else's natural instinct would be to run in the opposite direction.
“I've covered the biggest news stories from around the world for more than 30 years, and the one thing I've learned is that there is nobody quite as brave as a British copper.
“Lee, Marsha, Ashleigh and Tom - you've proved that point in spectacular fashion.
“And Adam and Miah - you've taught me that Manchester Metrolink staff are right up there in the courage stakes too.”
Sgt Valentine said: “You are always aware of the risks as a police officer, but this was a different type of attack. It’s not very often that you see somebody so intent on harming other members of the public and the police. It’s a scary thing.”
Miah, 39, said: “I just acted on instinct. There were trains coming in every four or six minutes and they would have been like lambs to the slaughter. He was intent on stabbing anyone near him. When I got home, I didn’t tell my wife. It took a bit of time to take it in. It’s brilliant to be recognised.”