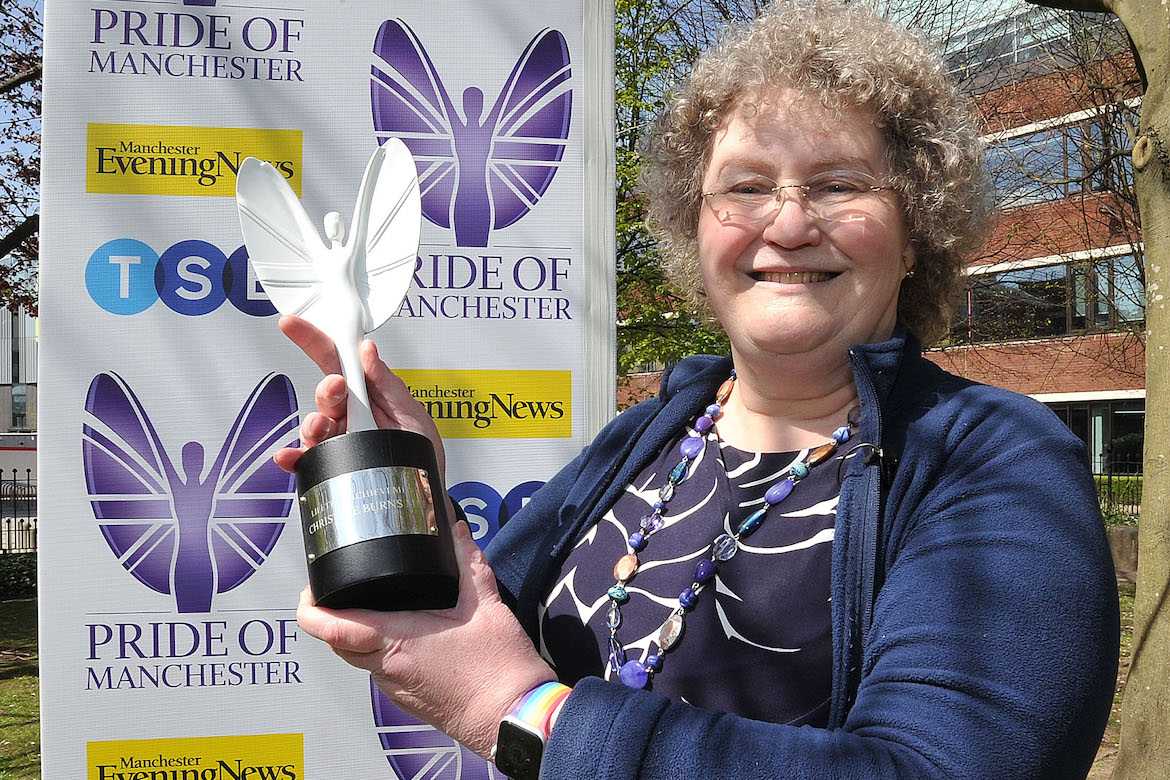 As a child, Christine Burns feared she was the only person in the world who felt the way she did.
Today, after devoting decades to campaigning for vital human rights for the transgender community, this pioneering activist has given younger generations of trans women and men the chance to live outside the shadows.
Christine’s tireless commitment to equality for all has been recognised with Pride of Manchester's Lifetime Achievement award, presented by Wigan MP Lisa Nandy.
The 67-year-old says: “We never go into activism or voluntary work with an eye to the plaudits, so when something like this comes along it’s a lovely extra. It’s also recognition of the value of the work we were doing, to help people live their best life.”
Christine remembers playing with a sewing box aged four when she told her mum for the first time that she wanted to grow up “to be a lady”.
But it wasn’t until she was 11 that she realised she was not alone after reading about other transgender people in the Sunday papers.
“I learned I was not unique – but according to the paper, it wasn’t a very good way to be,” she recalls. “So a lot of my growing up was a process of trying to deny myself to myself.”
Christine moved to Manchester as a student in 1972 and eventually confided in friends about her true identity as a trans woman, but fear of social disapproval saw her continue to live as man until she came out to her parents aged 28.
By then, she was a married IT consultant with a daughter, but while the relationship ended, she found the majority of her loved ones were supportive of her transition.
Christine was active in politics as a member of her local Conservative party when she decided to join Press for Change in 1993, to campaign on the rights and treatment of trans people.
She also became a member of the Parliamentary Forum on Transsexualism and realised she needed to officially make public her own status.
Christine says: “I realised early on that you can’t be an activist in secret.
“If I was going to be lobbying and speaking publicly, I had to be comfortable saying ‘I am a trans woman and this is what that means. These are the problems we face because of that’.”
For more than 30 years, Christine has been a leading voice for her community, helping to bring a series of successful legal challenges to make their lives safer and more secure.
These include a case in the European Court of Justice to protect employment rights in 1996, a High Court case over access to NHS treatment in 1998 and the European Court of Justice agreeing to the right of privacy and the right to marry in 2002.
Christine also negotiated with ministers drafting the 2004 Gender Recognition Act allowing people to change their legal gender, and sat in the House of Commons as MPs passed the life-changing law she had fought so hard for.
She was one of the first to get a certificate recognising her new female gender thanks to the act, which she says has given her and thousands since an increased feeling of protection.
After admitting she felt “a bit lost” after achieving her longstanding aim, Christine soon found there was plenty more to do and helped to develop the first ever trans guidance for the Department of Health.
She also worked to combat negative portrayals of trans people in the media and popular culture, advising soaps including Coronation Street, and news organisations on how to cover crimes involving trans people.
Christine, who chaired the North West Equality and Diversity Group and is a patron of LGBT North West, officially retired in 2013 and has since written a number of books, including Trans Britain: Our Long Journey From The Shadows, a definitive history of the UK’s trans community.
“When I retired, I thought ‘Right, that’s me done,’” she says. “But the Gender Recognition Act needs updating and there is a new wave of prejudice that has come out of nowhere.
“I’m so full of admiration of the next generation and their reasonable expectation they should be treated equally. Because equality isn’t about having special rights – it is just simply saying we want the same and doesn’t mean there are fewer rights to go round.
“It would not feel ethical to walk away and leave it to other people, even though there are now lots of them fighting the good fight. I wish they didn’t have to. All of us just want to get on and live our lives."