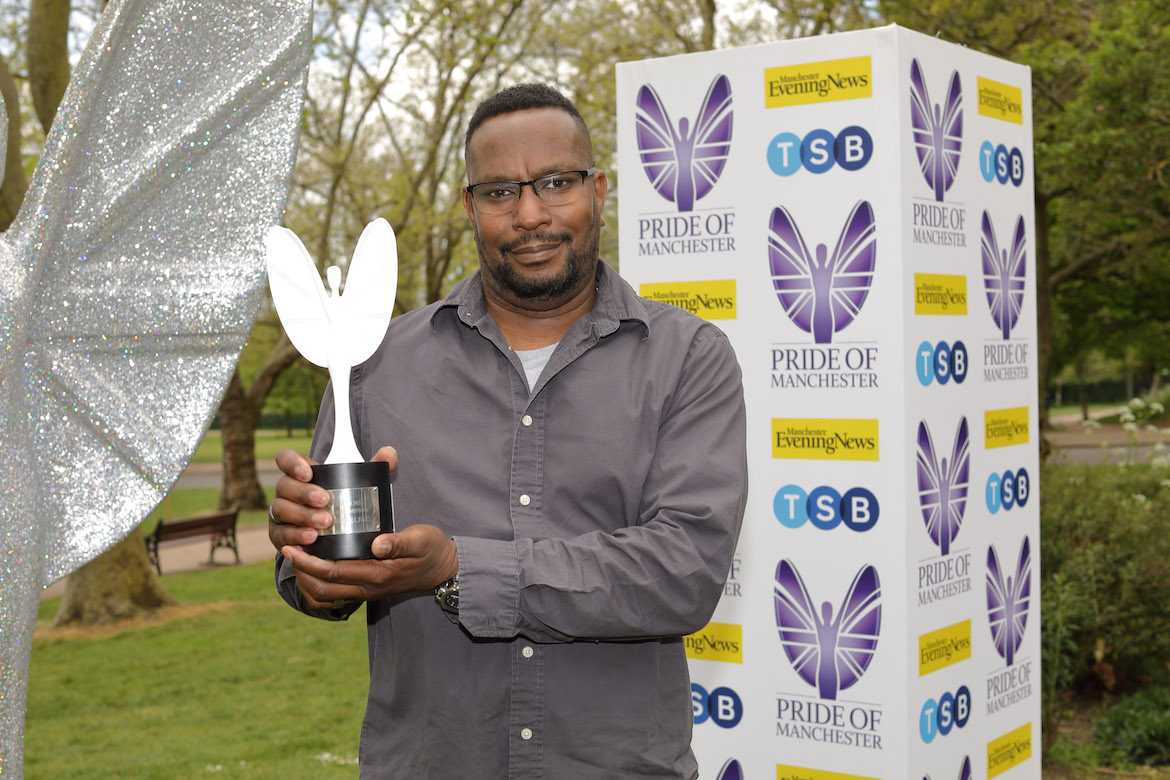 Inspirational mentor has dedicated his life to helping give kids a brighter future.

An inspirational charity CEO who helped to transform the lives of thousands of young people has been named as Pride of Manchester’s first ever Marcus Rashford Children’s Champion.
The Awards teamed up with the Manchester United and England star to launch a new category to celebrate an unsung hero who is giving youngsters a brighter future.
And Marcus, who is hugely admired for his own successful campaign on behalf of under-privileged kids, helped to choose Christie Spurling as the inaugural winner.
After a challenging childhood of his own, Christie has dedicated his life to helping kids like him.
He founded the youth and children’s charity N-Gage in 2006, and since then has dedicated himself to keeping kids on the right path through mentoring and one-to-one support. His selflessness was recognised with an MBE last year.
Christie had a tough start. He was given up for adoption as a baby by his birth mother, and spent the few months of his life in a children's home. A loving white family, with two daughters of their own, then adopted him and another black child.
“It wasn’t an issue for me that my family were white but we grew up in a Lymm, a village in Cheshire, and there were only three other black people around,” said Christie. “At the time growing up in the village almost everyone else was white. So I looked and felt different from the start.”
Christie struggled to fit in and hated school. “I wasn’t academic and spent most of the time outside of the headmaster’s office. I wasn’t a naughty child, I just didn’t engage, and that came across as being badly behaved.”
At secondary school his behaviour deteriorated and when he was 14 he was excluded and sent to a residential unit. “My mum and dad sent me there very reluctantly as there was no school locally that could meet my needs, but basically I was in a care home again. It was like boarding school for naughty kids.”
After leaving the unit, Christie struggled to find work, and felt he had no purpose in life.
But when he started volunteering with the kids club at his current church Ivy Manchester church he discovered a passion for working with young people.
He said: “I was immediately welcomed. People took me under their wings, especially the youth workers who mentored me.
“For the first time since leaving residential school people apart from my family were really making an effort with me, and wanting to give me a chance despite my background. I knew then that I wanted to give other children the support I had lacked growing up.
“They noticed I was good at getting alongside youngsters who were shy or struggling with their behaviour as I knew what they were going through.”
Christie met his wife Jo at the church. The couple have now been married for 20 years and have two children, Ella, 9, and Amy, 16.
When he was 30, he launched N-Gage to help youngsters at risk of educational or social exclusion. “I just felt so passionate, and knew I could offer young people a lifeline and show them a different path,” said Christie, now 45.
He worked with police to start a network of community volunteers, and gave one-to-one support to youngsters himself. Prior to the pandemic Christie and his team engaged regularly with around 300 young people a year and indirectly with more than 1,000 in schools.
N-Gage has grown into a team of 15 people who work in the evenings, plus five full time staff and an army of volunteers.
They have a converted bus kitted out with games consoles, tablets and music technology which they use as a mobile youth centre, reaching young people in the places they hang out.
Christie also goes into schools to offer one-to-one support as a youth worker. “I have three young lads I see regularly. They are aged around 14 and 15. What they need most is a positive male role model in their lives. I just show them that I know what they are going through and we talk about how their lives could be. I had one lad who was kicked out and was being home-schooled. I met with his family and got involved. He is now doing really well, and is back at mainstream school.”
Christie received his award in a special surprise presentation with MP David Lammy, one of his political heroes, and Andrew Levy and Simon Bartholomew from his favourite band The Brand New Heavies.
He said afterwards: “It was such a surprise, I don’t really do emotions, but I felt very emotional, I could not get my head around what was happening. I don’t do this for plaudits but I feel so honoured.”