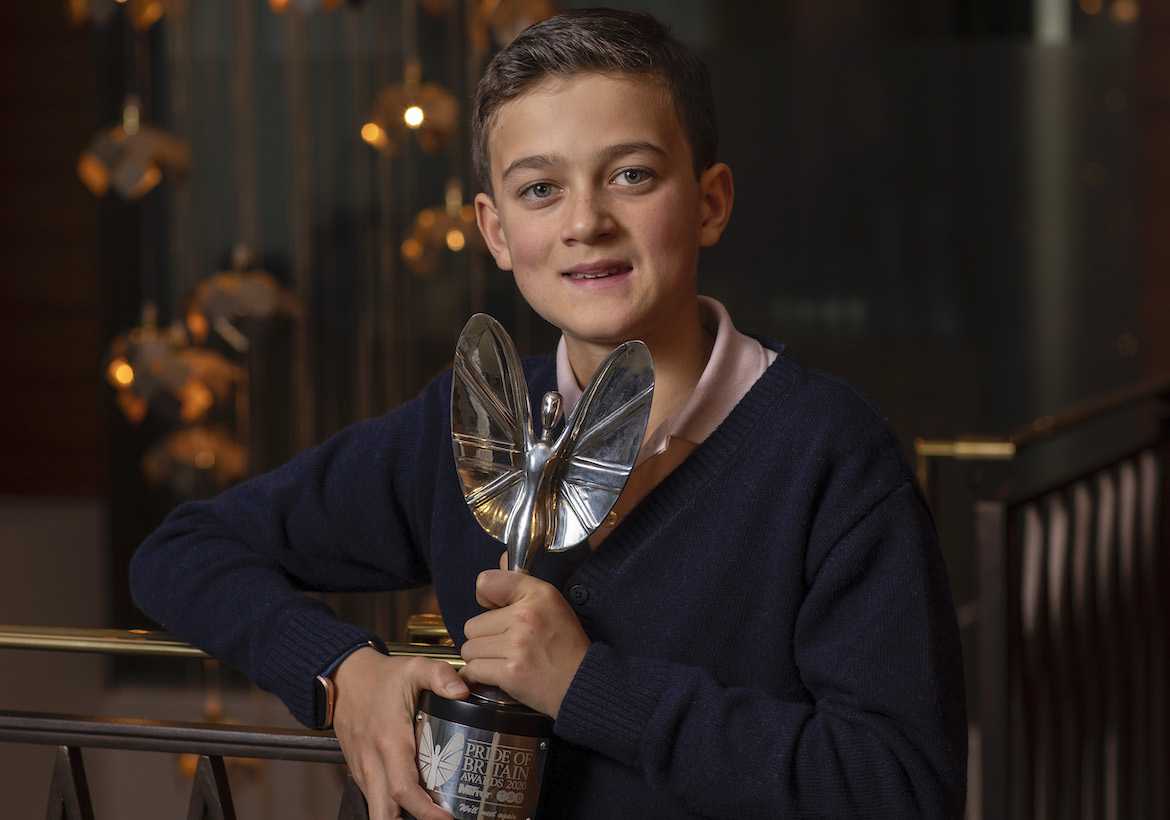 While on a family hiking trip the 10-year-old scrambled 100m down a ravine to save his seriously-injured mum in a terrifying mountain rescue.

Sebastian is a huge sports fan, so who better to surprise him with his Pride of Britain award than football legend David Beckham.
Sebastian thought he was being filmed for an interview about his mountain rescue when the former England ace walked in.
“It was a huge shock to see David Beckham walk in,” said Sebastian, now 11. “I was in awe because he is such an icon and I didn’t know what to say because I felt star-struck.
“David was really kind and said that family was the most important thing to him, and that he admired what I had done. We chatted about many things including who my favourite players were, and I had to say Thierry Henry and Dennis Bergkamp.”
His dad Derek added: “David was clearly very family-oriented and down-to-earth. He seemed like a real family man. He talked about his sons and his daughter Harper, who is close in age to my three.”
And mum Suzanne added: “David immediately got how meaningful it was for me, he just understood that here was a boy who had saved his mother’s life. You could tell that Sebastian’s story had really touched him.”
About his award Sebastian said: “I just did what I had to do. I guess it was brave, but it really wasn’t compared to what my grandfather did when he took part in the Allied invasion of Normandy in World War II.”
Sebastian, his parents and his two younger sisters, Francesca, 10 and Natasha, 6, were walking up Ben Cruachan, a 1,126m peak in Argyll and Bute last October when the accident happened. As they made their descent, the weather deteriorated suddenly and the family took a wrong turn, becoming lost as darkness fell.
Suzanne, 43, slipped and fell 100m down the mountainside into a ravine, suffering serious injuries including head trauma and cuts to her face, several broken bones and a smashed knee.
Derek tried to call for help, but his phone battery was dead. It was at this point that Sebastian decided to take action. Before his father could stop him, the schoolboy from London scrambled 100m to the bottom of the ravine, where he found his mum barely conscious, surrounded by scrub and rocks. Incredibly, her phone had survived the fall, and Sebastian calmly he provided an exact position for rescuers, using the phone’s GPS.
While he waited for help to arrive, Sebastian cradled his mother for over an hour as the weather worsened and a storm broke out. He held her hand, reassured her and terrified she would die, tried to keep from slipping into unconsciousness.
Even as his mum was winched into a rescue helicopter, Sebastian stayed calm and offered his assistance. Suzanne spent a month in hospital recovering from life-threatening injuries.