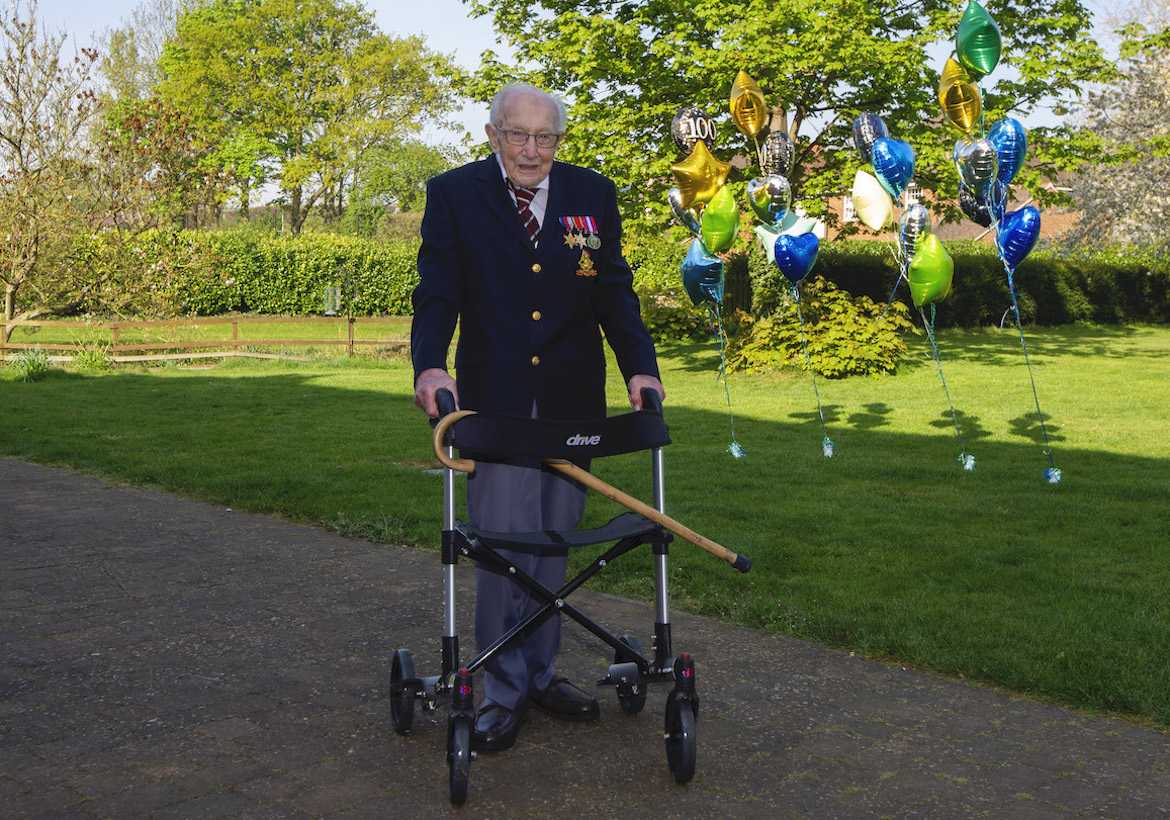 Centenarian inspired Britain and the world with a lockdown walking challenge that raised more than £38million for NHS charities.

In March, Captain Tom set off to walk 100 laps of his garden before his 100th birthday in April.
He hoped to raise £1,000 in tribute to the hospital staff who had cared for him during treatment for cancer.
Within days, his efforts had caught the imagination of people from every corner of the country and beyond.
By the time he completed his walk, he had raised more than £32million, a total which has continued to rise, and created a movement of people determined to follow his mantra that “tomorrow will be a good day”.
He was also knighted by the Queen in July, in her first public engagement since lockdown began, in a special ceremony at Windsor Castle.
We surprised Captain Tom with the news he is a Pride of Britain winner on Good Morning Britain. He was being interviewed by hosts Piers Morgan and Susanna Reid about his 100th birthday when Pride of Britain host Carol Vorderman joined the video call to share the news.
Stars also lined up to pay tribute to his efforts in a special film, including actors Dame Julie Walters and Michael Sheen and sporting heroes Anthony Joshua, Harry Kane and Joe Root.
And in a magical moment in October, Captain Tom received his trophy from some of the children he inspired to raise money, and singing icon Katherine Jenkins.
He said afterwards: “It feels absolutely amazing. I am totally in awe of this award, it is such a prestigious one.
“The children are marvellous, I think they are all absolutely brilliant, it is great to see the children raising money for their chosen charities and they are all such wonderful characters, it is a delight to see.”
He added: “I certainly have no plans to stop anytime soon, I’m not done yet not by a long chalk. The compassion and love that I have been shown from far and wide has given me renewed purpose and re-energised me.
“Through The Captain Tom Foundation my family and I have a mission to inspire hope where it is needed most. I do hope we can continue to inspire others as together we have a real chance to ensure that tomorrow will be a good day.”