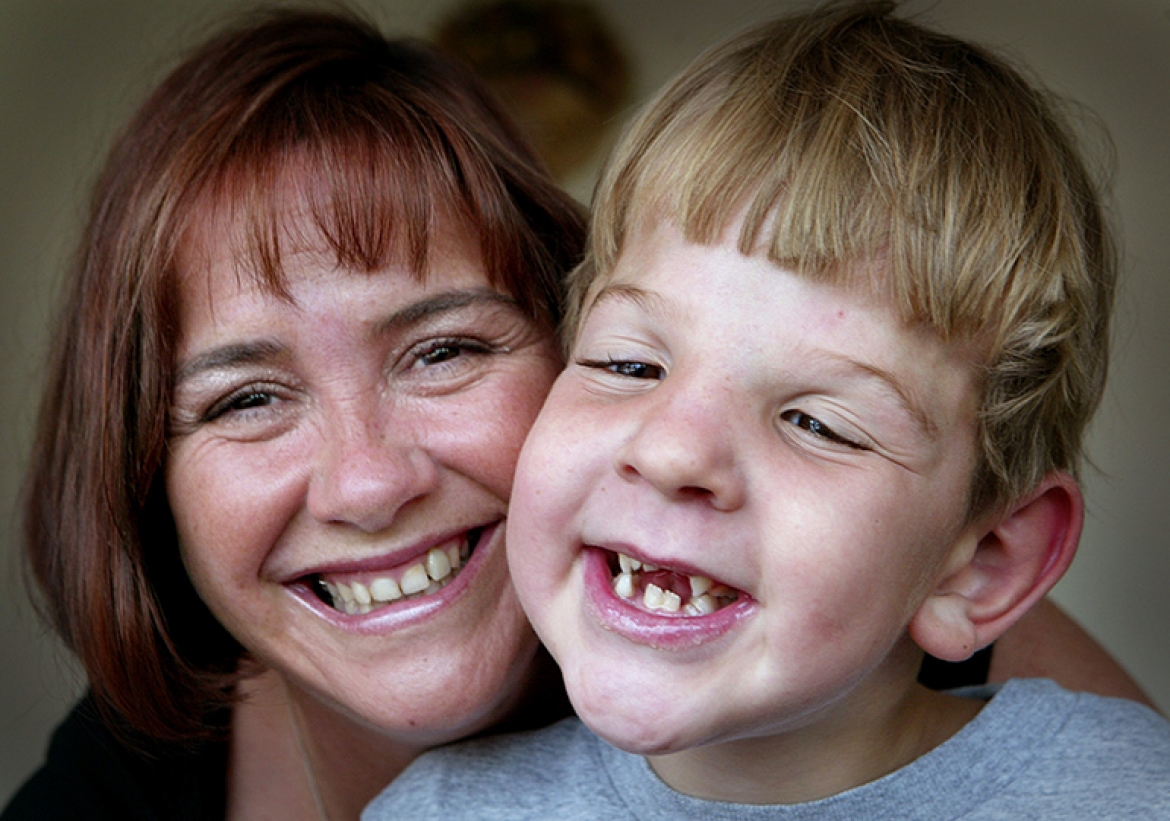 Little Ollie Cartwright is the true face of courage after enduring 130 major operations to remodel his skull - and save his life.

Despite suffering a horrendous amount of pain in his short lifetime, the nine-year-old's cheeky playful nature amazes and warms everyone who meets him.

A popular boy at school, this lively youngster has a beaming smile despite having suffered more than anyone should ever have to endure in a lifetime.

"We sometimes just look at him with tears in our eyes because we are so happy he's still here", says his mother Julia. "We have almost lost him 11 times."

Ollie, from Crick, near Northampton, was born with the genetic and disfiguring condition Pfeiffer Syndrome - where the bones in his skull were fused together, leaving his brain with no room to grow.

The rare condition affects only one in 100,000 births in the UK every year -although Ollie's case is one of the most difficult ever seen by a surgeon.

But in a remarkable series of operations, specialist doctors at the Radcliffe Infirmary in Oxford have smashed his fused bones into pieces and rebuilt them like a jigsaw to create space. The longest operation has lasted 14 hours.

Since his first operation when he was just five weeks old, Ollie has spent most of his life in hospital. But, despite being away from home and having to put up with hundreds of hours of intricate surgery, he never complains.

He was also born with deformed thumbs and feet, is partially deaf and blind in one eye.

Specialist nurse Sue Greenwood, says she and the medical team are very fond of Ollie.

"He is a wonderful little boy and the way he and his family have tackled the situation is truly admirable", Sue explains.

Ollie has survived life-or-death ordeals in intensive care 11 times. His condition makes him susceptible to meningitis, which he has also had to beat four times.

At the age of two Ollie was the youngest child in Britain to have his head bolted into a titanium frame - with screws which had to be tightened every day.

He wore the frame for four months.

Against all the odds, Ollie started school in 2003 and has become the life and soul of his class. He returned to school just over a week after enduring his last four-and-a-half operation in September.

"He is always laughing and having fun", says his dad Mark, 39. "He literally lights up a room when he walks in."

Julia, 41, says: "Ollie has enriched our lives and taught us to value the simple things.

"He will have to have plenty more operations until he is 18 when his brain stops growing. But he never complains about the pain, he just gets on with it."