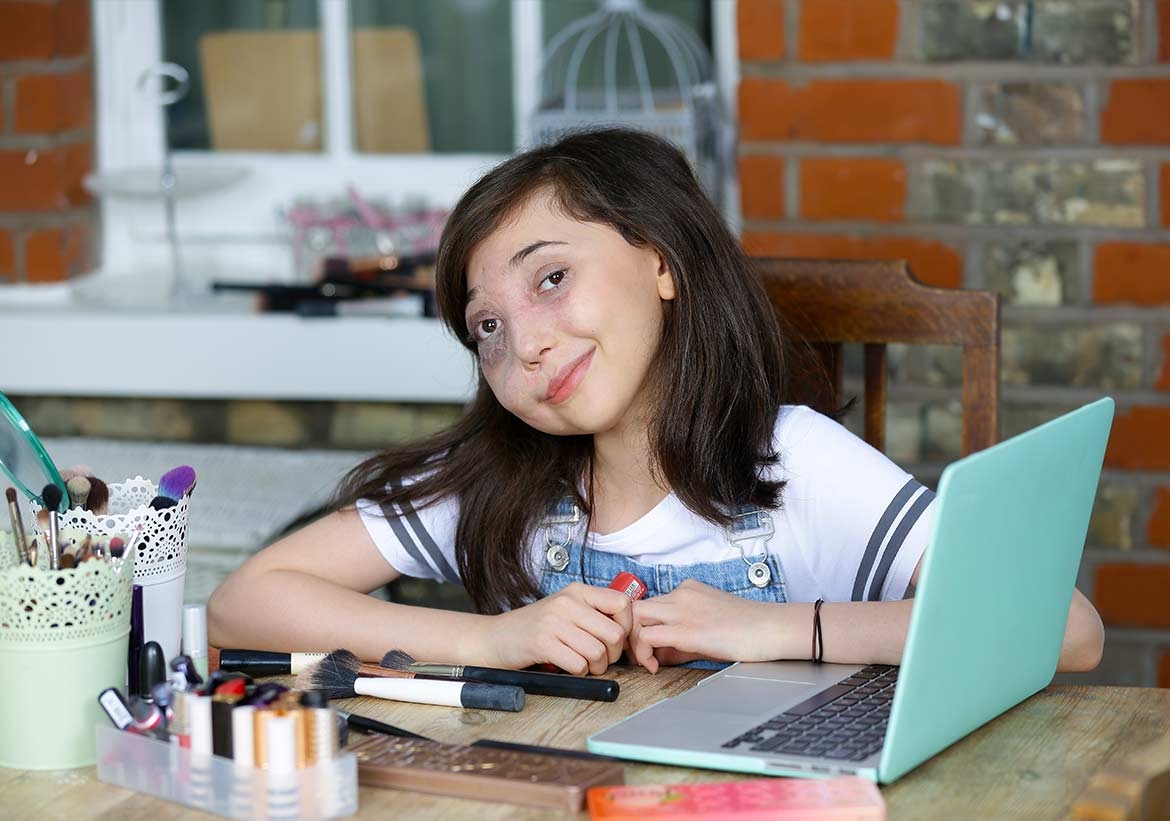 The schoolgirl with a potentially life-threatening condition has become a social media star, with her video blogs showing others how to cope with chronic illness

Nikki was just six when her parents noticed veins popping up on the right side of her face. She was diagnosed with arteriovenous malformation (AVM), abnormal connections between arteries and veins.

It causes intense pain, in most cases is incurable and leads to potentially fatal nosebleeds. So far Nikki has had 28 operations and endured more than 300 hospital visits as doctors try to manage her condition.

Many children would have shut themselves away from the world, but the 12-year-old has shared her story with millions of people online.

Nikki says: “I felt quite lonely because after it was diagnosed, my friends still didn’t have a care in the world while I had to give up a lot of clubs and activities.

“I didn’t go to school very often and I felt isolated.”

She would look in the mirror in despair and wish she could use face paint to hide the veins.

Then, one day two years after her diagnosis, she was stuck indoors while her friends met at a party, so she decided to set up a YouTube channel.

She posts videos talking about her condition, gives make-up tips and offers advice to people struggling to cope with deformities.

To date her channel has attracted four million views and she has 79,000 subscribers.

Nikki, from North London, says: “People contact me who have AVMs and other facial disfigurements and I want my channel to be a community where everybody can be imperfectly perfect in their own special way.

“I’ve found people who are my best friends now.

“It’s nice to know you’re not as alone as you think.”

She and her family have also raised more than £400,000 for research into AVM at Great Ormond Street Hospital, where Nikki has been treated, and University College London.

“I’m not going to lie and say it doesn’t get me down or make me angry,” Nikki says.

“But you can either be negative and not enjoy life – or you can be positive and block out all the negativity and live a lovely, healthy, joyful and happy life.”

Nikki and her parents had few places to turn at first as her condition was so rare. So they started The Butterfly AVM charity to raise awareness, support and funds for research.

Her father George, 50, says: “Nikki is an inspiration to people round the world and many people with AVM have thanked her for giving them hope.”

What an incredible young lady. Her condition is an enormous challenge for her to deal with, but she does it with incredible resilience, humour and a personality that shines like a diamond. She always thinks of others first too. Absolutely inspirational. Pride of Britain judges

View the embedded image gallery online at:
https://prideofbritain.com/history/2016/nikki-christou#sigProId005da57851
Tagged under