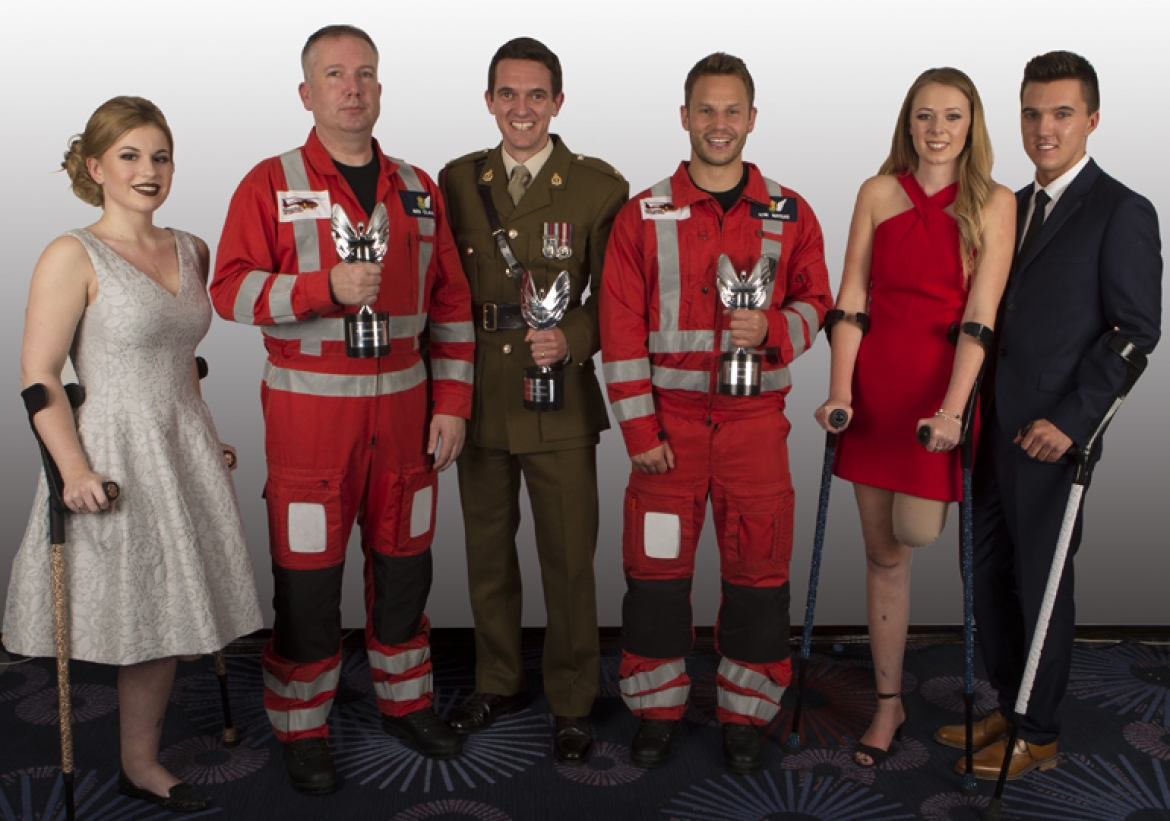 Major David Cooper, Tom Waters and Dr Ben Clark have been given a Pride of Britain award for their bravery in climbing 40ft to reach the rollercoaster crash victims and carry out daring rescue.

The crack team of emergency responders who risked their own safety to keep the victims of the Alton Towers Smiler smash alive have been celebrated with a Pride of Britain Award for their bravery.

Army doctor Major David Cooper and aircrew paramedic Tom Waters were on duty with Midlands Air Ambulance when they were called to Alton Towers theme park following the crash on the Smiler ride on June 2.

Despite having limited rope training, they ignored health and safety rules to climb the structure to save the lives of the trapped victims.

All three say they didn’t think twice about risking their own lives – especially when they realised how serious the situation was for the most badly injured casualty, 18-year-old Leah Washington.

“There were people that needed our care up there,” says Tom, 27. “the need outweighed the risk.”

David, 34, says: “We just did what we needed to do. Lots of people may have waited, but you just can’t do that when someone is in the condition that Leah was.”

West Midlands Ambulance Service assistant chief Steve Wheaton, who coordinated the rescue, said the men put themselves at huge risk to work at that height.

“It broke every rule in the book, and under normal circumstances I would never have allowed it,” says Steve. “but the decision was taken owing to the condition Leah Washington was in.”

Dealing with a partial amputation at a height of 35-40ft, they managed to stem Leah’s life-threatening bleeding from a severed artery.

They also carried out a life-saving blood transfusion while she was still trapped. Their bravery has earned them the top prize in the Emergency Services category at the Daily Mirror's Pride of Britain Awards.

David says: “In a normal environment you would have continuous blood pressure monitoring, oxygen saturation monitoring – but there just wasn’t the space.

“We were standing on the headrests of the seats and on the safety harnesses of the carriage in front.”

Ben, 40, adds: “There were a lot of times when I was just shaking my head because I didn’t know if it was going to work and if they were going to stay alive.

“When you see people dying in front of your eyes and you know you can’t do anything any quicker – it was very difficult.”

The men spent four precarious hours tending to the most seriously injured, and didn’t come down from the rollercoaster until the victims were freed.

Leah Washington later paid tribute to her rescuers, saying: “I can’t thank them enough for what they did for me. I wouldn’t be here if not.”

Pride of Britain judge Sir Peter Fahy, Chief Constable of Greater Manchester Police, said: "These three took one hell of a risk. It was an incredibly unusual and dangerous situation. They very much had to think on their feet and showed a complete disregard for their own safety.”

These three took one hell of a risk.  It was an incredibly unusual and dangerous situation.  They very much had to think on their feet and showed a complete disregard for their own safety.Sir Peter Fahy

View the embedded image gallery online at:
https://prideofbritain.com/history/2015/major-david-cooper-ben-clark-and-tom-waters#sigProId3b27894ed2
Tagged under