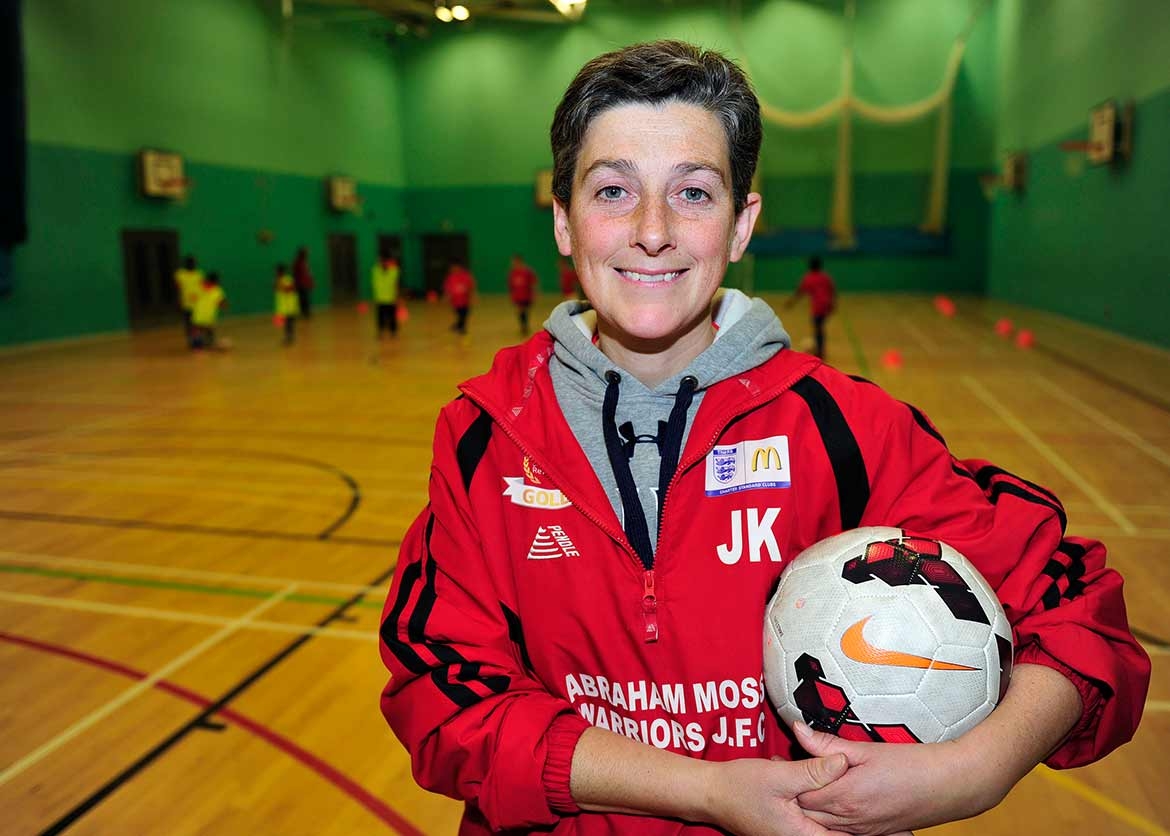 In the year The Football Association celebrates its 150th anniversary, this determined grassroots volunteer proves the nation's favourite sport has the power to transform people's lives for the better.

June Kelly set up and runs a thriving junior team in one of the country's most deprived areas, using football to promote numeracy and literacy, and to steer youngsters away from gangs, drugs and crime.

She also successfully lobbied for the only national rule change in half a century, and her young players have been officially named the best-behaved in the country.

June, 43, has loved football since she started playing at the age of six.

Now the school worker voluntarily runs Abraham Moss Warriors, a local club she formed because she was frustrated by the lack of facilities in Cheetham Hill, Manchester, which is in the bottom 2% most deprived areas in the country.

She explains: "I set up the club in 2001 because young people always get such a bad rep, but I wanted to give them a chance.  I wanted to engage them to keep them off the streets and hopefully encourage them to better themselves as well."

Starting with 12 players, it now has more than 150 registered members with a long waiting list.

And the club doesn't just focus on football.  June also runs a popular literacy and numeracy program to help underachieving boys in the team become more interested in reading and learning.

Last year, as part of this project, June managed to get NASA astronauts to visit from the US to meet the players.

She says: "I thought they'd be with us for an hour, but they stayed all afternoon.  It was fantastic for the team."

June, who has enlisted the support of the police, says: "It's so easy for people to slip into the wrong crowd, so I think it's important to keep them informed about the choices they've got in life.

"Some don't realise they have any, so I like to try and change that."

And in 2004, June made headlines when the Warriors were thrown out of the League for not wanting play during Ramadan - as a majority of the team were fasting.

June lobbied The FA and won a national rule change - the first in 51 years - so no one had to play on holy days.

"It was a difficult time for the team, but we kept training," says June.

"I teach the kids to stand up for what they believe in, and I didn't think I'd be setting a good example if I backed down."

June has also opened a gym to get parents fit while their children play football and take part in club activities.

She does all this despite suffering Addison's disease and a heart condition, which leaves her very tired and means she needs weekly hospital check-ups.

She says: "I love football, and I love these young people.  It's amazing what they can do if they're only given a chance."

June's belief in the kids that she works with and her tireless devotion to them is absolutely inspiring.  The Premier League may make the headlines but June is a true football star and a deserving winner.The Judges