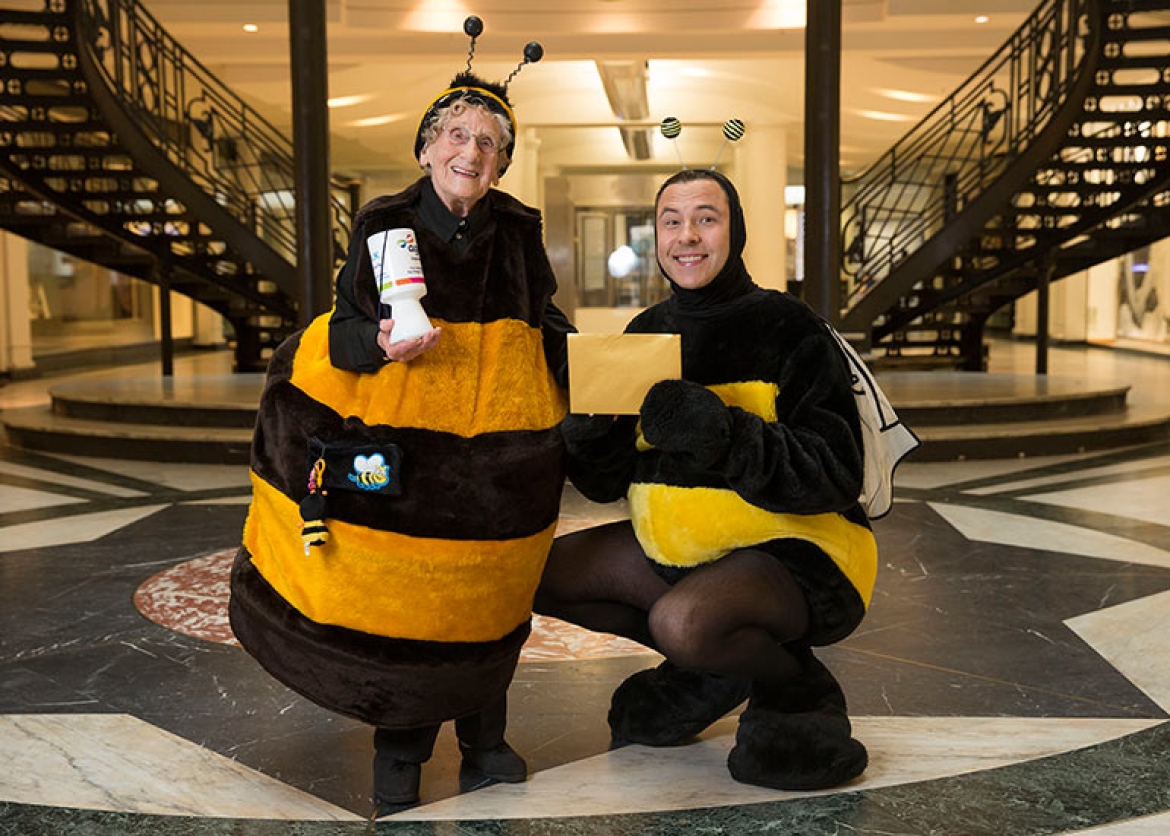 At the age of 91, you'd excuse Jean for slowing down a bit.  But there's just no stopping this fundraising legend known universally as "The Bee Lady".

Dressed in her eye-catching bee outfit, she's out come rain or shine to collect loose change in a tin for good causes.

It's one of the most thankless forms for fundraising, but thanks to Jean's kind-hearted nature she has managed to collect £92,000 in her tin for Age UK Hull.

Despite suffering severe arthritis, she collects in shopping centres in the city whatever the weather every other Friday, and visits residential care homes regularly as well.

And as well as raising cash, she does it to put a smile on other people's faces too.

"The charity is so important, the elderly can be forgotten sometimes so I like to help them," she says.

Jean got involved with Age UK Hull 14 years ago, after the death of her husband.  She attended a craft class run by the charity and realised what a difference it made to the lives of so many older people who often suffer from loneliness and depression.

She decided she wanted to give something back, so the charity lent her a rented bee outfit to help attract some attention as she went fundraising with a tin.

Jean loved the suit so much, she kept rehiring it until eventually her daughter Jennifer Baldwin made one for her to keep fro, three hula hoops and some fur from a charity shop.

The busy bee has now become the mascot for Age UK Hull and is still going strong.

Jean says: "When the children come up to me, they all want to stroke the bee fur and have a cuddle."

She has also given youngsters a treat at Christmas by dressing up as Santa at shopping centres.

Pam Hall, business manager at Age UK says: "There's no stopping Jean.  Sometimes we ask her to take a break, but she just doesn't take no for an answer.  She's a real people person, and jsut likes to make everyone happy and do her bit for the charity.  We can't thank her enough for everything she does."

Last summer, Jean swapped her bee costume for the tracksuit of an Olympic torch bearer, when she completed a leg of the relay in Hull.

Even a nasty fall which put Jean in hospital for weeks two years ago didn't stop her and she has spent more than 1,000 hours rattling her tin.

She says: "Everyone knows me and after my fall I couldn't let them down.  The charity told me to take a break, but I wanted to keep helping.  I have no idea about technology so someone helped me set up a webby page with a picture of me in my busy bee suit, and people donated there while I was stuck indoors.  But I was back out as soon as soon as I was steady on my feet again."

Jean now has a Facebook page dedicated to her, with over 3,000 fans.

When most people retire it's time to put their feet up.  But Jean is out whatever the weather to put a smile on people's faces, and raise money for an excellent cause.  She's a wonderful example to the rest of us.The Judges