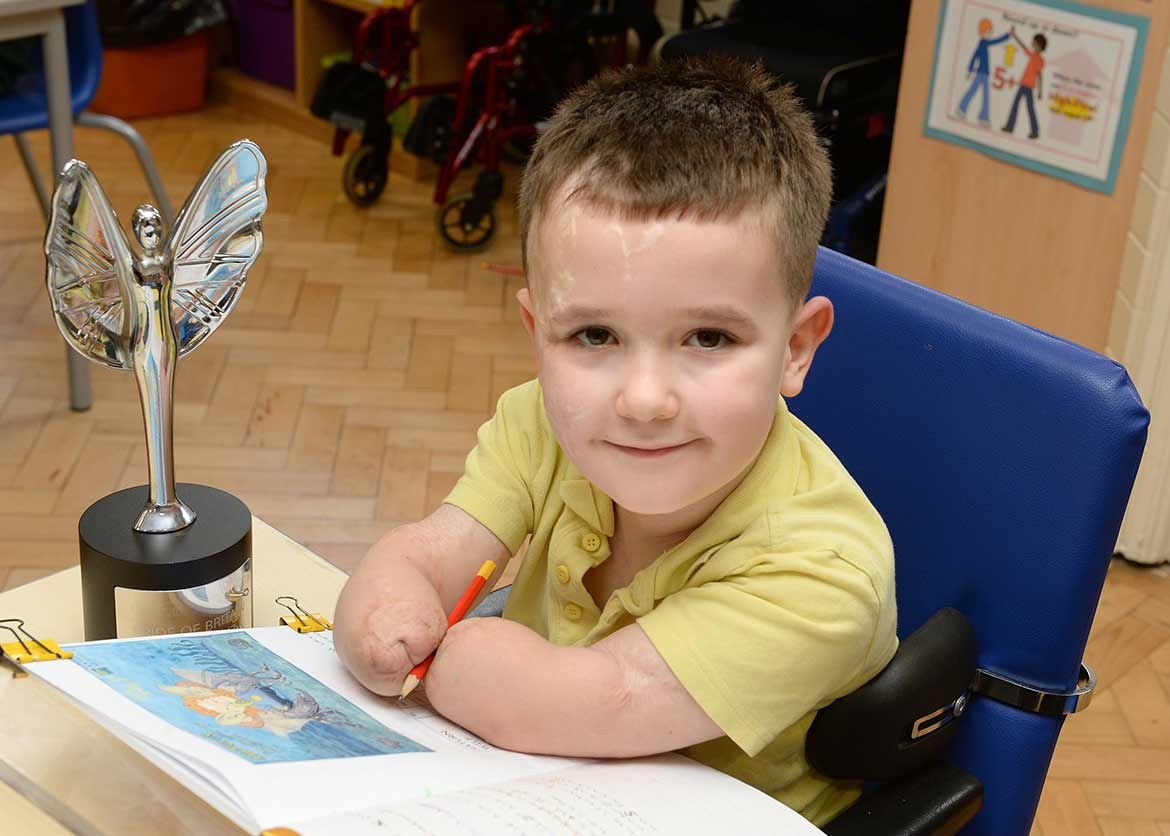 As little Harley lay and hovered on the brink of death from meningitis, doctors made the heartbreaking decision to amputate his arms and legs to save his life.

Then just a toddler, Harley pulled through and fought back against what could have been a devastating disability with inspirational spirit and determination.

Harley, eight, simply refuses to let his missing limbs hold him back in life.

The cheeky schoolboy even completed a gruelling 1.5km race on his false legs to thank the hospital that saved him.

Harley's remarkable story begins in May 2009 when, aged just three, he woke up one nights with a sore throat and high temperature.

His concerned parents Samantha, 28 and Adam, 25, took him to hospital where doctors sent him home with a suspected ear infection.

But the next day Samantha spotted a rash over Harley's neck.  Within just a few hours he was fighting for his life against bacterial meningitis.

The youngster's heart stopped three times and he was also clinically dead for four minutes before doctors revived him.  His skin turned black as septicaemia set in and stopped his circulation system working.

Samantha recalls: "I was so hysterical nurses had to pull me away.  I couldn't believe it was happening to my little boy.  I thought he was going to die."

Doctors stabilised Harley but the youngster was still fighting for his life.

"I was at his bedside and he whispered if he could have some fish fingers," says Samantha.  "It was the last thing he said before doctors put him in an induced coma to keep him alive."

It was two weeks later that medics amputated both arms and both legs to save his life.

"Doctors warned me the next step would be amputation but I thought it might be a few fingers, or a hand," says Samantha.  "When I was told it would be all his limbs I just couldn't take it in."  She adds: "The first time I saw Harley after surgery I collapsed.  I couldn't cope."

Yet the brave lad never stopped smiling and was home with his family in Stockport by Christmas.

"I couldn't believe how quickly he adapted to his new life," says Samantha.

"If anyone struggled to cope it was me, not him.

"The day I finally gave him the fish fingers he'd asked for, he was so excited like he was the luckiest kid on Earth."

A fund set up in Harley's name allowed him to get prosthetic limbs, and he threw himself into school and everyday life without complaint.

Four years on, Harley decided to give something back to the hospital that saved his life.

In May this year, he completed the 1.5km BUPA Mini Great Manchester Run non-stop - the furthest he'd ever walked on his new limbs - raising more than £1,000.

Samantha says: "Seeing him finish made me so proud."

Harley, who wants to be the first man with no legs to walk on the Moon says: "I was very nervous but I enjoyed it."

He adds: "It's important to raise money for Manchester Children's Hospital because they help people."

Harley's fighting spirit is amazing.  He simply refuses to let his disability hold him back at all, and is incredibly brave.  Even at his tender age he is a true inspiration to anyone faced with difficult obstacles in their lives.The Judges

View the embedded image gallery online at:
https://prideofbritain.com/history/2013/harley-lane#sigProIdc933eeeb68
Tagged under