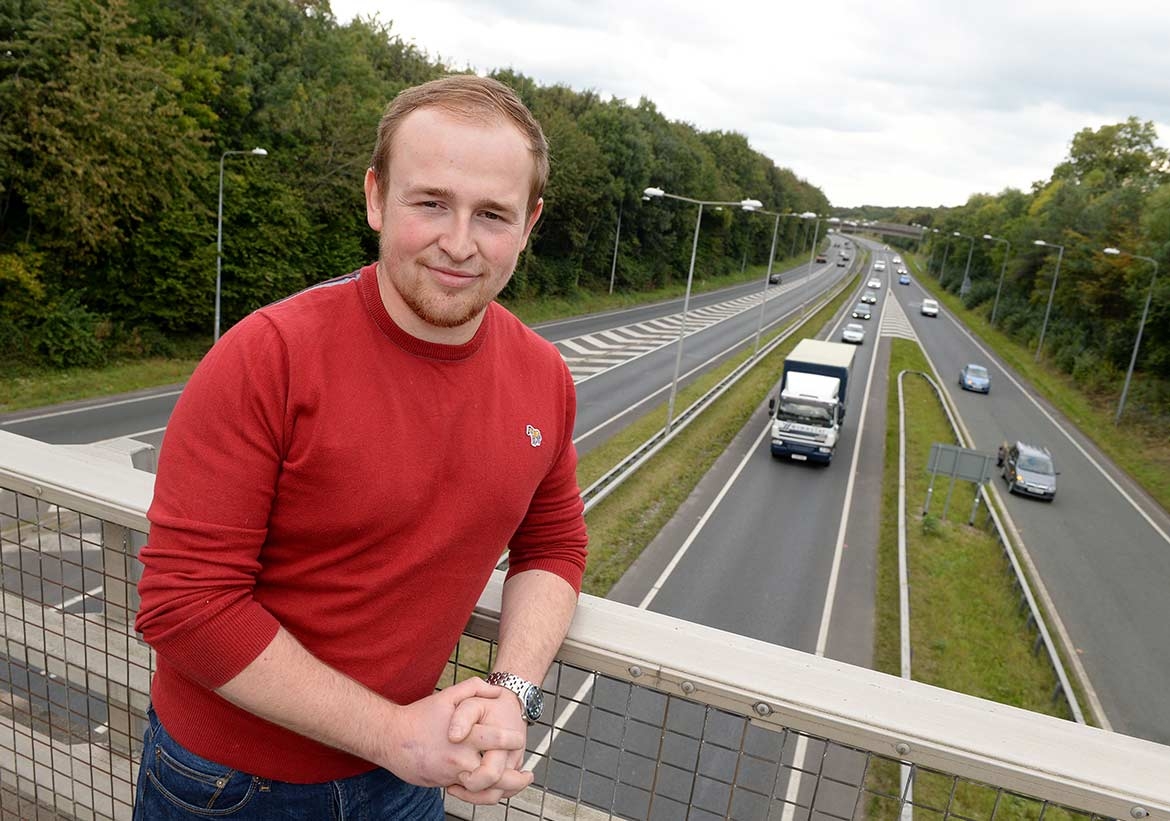 William his own life to save a terrified pensioner trapped in a burning car, suffering serious injuries in the process

Trapped in her car with flames licking at the windscreen and smoke pouring through the dashboard, pensioner Anne Wade thought she was about to die.

As other cars sped past, she tried to get out but the door was jammed.

The 73-year-old had been driving home to Allerton on the M60 motorway after visiting her grandchildren in Leeds when the heating failed.

“Two or three miles later the steering and the brake wouldn’t work properly,” she recalls.

She managed to pull over and stop on a slip road, but the situation was becoming more dangerous by the second.

Anne adds: “The smoke started coming out from under the bonnet, then a few seconds later the flames came out.

“I tried to open the door and it wouldn’t open.”

The electrics had failed, locking the doors and trapping her in the car. “I was thinking ‘God, I’ve had it’ and then I heard Will banging on the window,” she says.

William Edwards had seen Anne in the driver’s seat of the burning car as he drove past.

He stopped, ran over and tried to force open the door, then attempted to smash the window with his arm.

“The window felt like a brick wall – my elbow just kept bouncing back off,” says Will, 24, from Wrexham.

Despite onlookers telling Asda worker Will to step away as there was nothing more he could do, he grabbed a wheel brace from his car.

After telling Anne to cover her face, he smashed through the window, cutting open his arm and severing two tendons in his hand.

“The glass shattered and the force with which I hit it, my hand just carried on through the glass,” he says. “I didn’t feel any pain at first, but blood started coming out very quickly.”

His hand was so badly damaged that the bone was visible, but with the help of others, he was able to force open the door and pull Anne to safety.

“I didn’t even give it a second thought. I just acted on instinct,” he says. “I would do it again in a heartbeat – Anne’s alive and that’s the only thanks I need.”

As the fire engulfed the car, a lorry driver turned a fire extinguisher on the flames.

The fire was finally put out when firefighters arrived from Salford fire station.

Greater Manchester Fire Officer Peter O’Reilly says: “For someone like Will to do what he did and put his life at risk really was selfless and highly courageous.”

Anne says: “The fire brigade told me that another couple of minutes and I would have been dead. Will rescued me with no thought for his own safety. It’s impossible to say how thankful I am.”

This is the sort of thing that could happen to any of us driving along the motorway. For this man to stop and risk his life when the car is actually on fire is pure bravery.Pride of Britain judges

View the embedded image gallery online at:
https://prideofbritain.com/history/2003/william-edwards#sigProIdbcc5c30a92
Tagged under