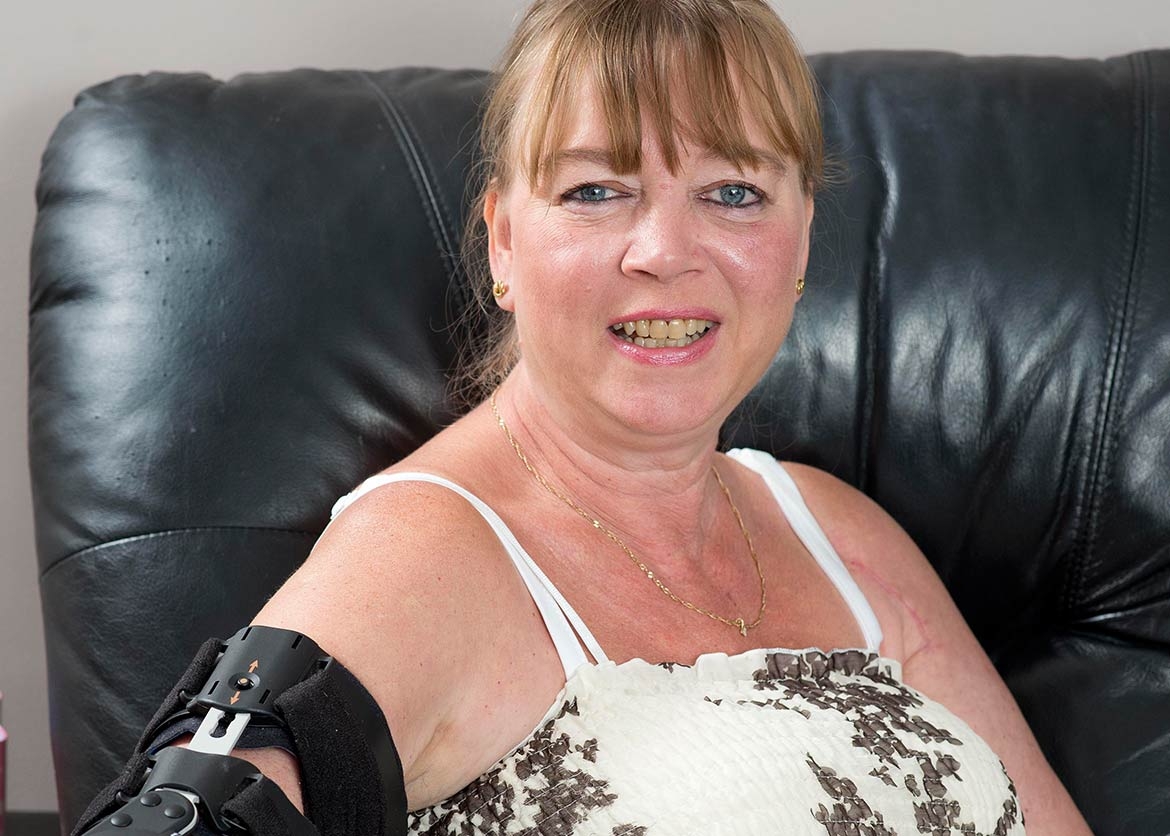 When an out-of-control car hurtled towards a group of children at a school crossing, lollipop lady Karin Williams dived into its path to push them to safety.

The mum-of-one suffered serious injuries, but thanks to her astonishing bravery, none of the youngsters was killed.

The 61-year-old driver of the car had lost control after mounting a speed bump and stepping on the accelerator instead of the brake.

Karin, 50, sprang into action as the Audi A3 surged towards the crossing that she was patrolling.

She says: "I don't remember pushing the children away.

"I just remember standing on the pavement with the children around me waiting to cross, and the next thing I knew I was on the ground with a paramedic leaning over me telling me not to move.  I wasn't in pain, I was in shock."

Karin had taken the brunt of the impact before becoming trapped under the car which had hit a bollard and overturned in front of terrified parents and children outside the school in Rhoose in the Vale of Glamorgan.

She was rushed to hospital where she was to endure an eight-hour operation on her badly injured kneecaps, legs, elbow and shoulder.

Eight other people involved in the accident - three adults and five children - needed hospital treatment, but they are all now recovering.

Onlookers were in no doubt that children would have died without Karin's courage and quick-thinking.

A paramedic who attended the scene said: "I've seen a lot of road accidents in 28 years' service, and I was amazed there were no fatalities.

"If the car had hit the children and not Karin, it would have killed them."

Karin says it wasn't until she was in hospital that she was told what had happened.

"A police officer came to me and said, 'do you realise what you've done?  You pushed the children out of the way'.  I had no idea, but people watched me act on impulse I guess.  It took ages for it all to sink in because I was on a lot of medication.

"I love my school, and the children, I', just glad no one else was seriously hurt."

There is no doubt that the outcome could have been very different if it wasn't for Karin's actions.

She is now undergoing regular physiotherapy and relies on a wheelchair to get around.

Doctors say it could be a year before she's completely mobile again.

But she is determined to go back to the job she adores.

"I managed to visit the school recently, which was amazing.

"I've missed all the children so much since the accident and it was lovely to see all their faces again.  They were all so pleased to see me too," she says.

Like so many other heroes, Karin remains remarkably modest about what she did.

She says: "People tell me I'm a hero, but I was just doing my job in my opinion.  I don't feel like a hero at all.

"For me the real heroes are my daughter and my husband who have been my rock since the accident.

"But I'm glad I was there as it doesn't bear thinking about what might've happened to all those children otherwise."

To act on her feet that way that Karin did simply defies belief.  She didn't hesitate to put herself in danger and showed real bravery to protect those children.  It was this quick thinking that saved their lives.The Judges

View the embedded image gallery online at:
https://prideofbritain.com/history/2003/karin-williams#sigProId755de0861d
Tagged under