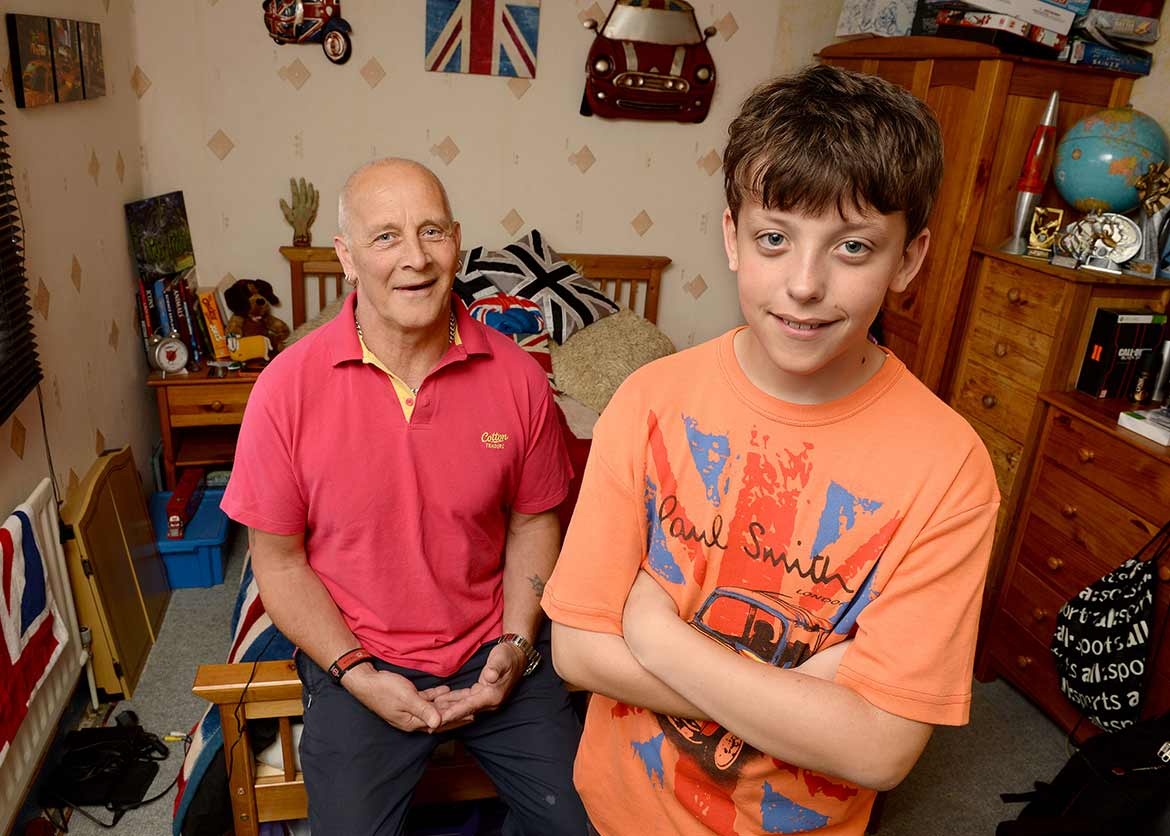 Bailie Kershaw was plunged into a terrifying life-or-death situation when his dad suffered a massive heart attack and collapsed in front of him.

The 12-year-old was alone at home with his father because his mum Maureen, 48, was working late and his brothers and sisters were out.

So it was up to the schoolboy to perform CPR to save his father's life.

Dad Chris, 59, had suddenly collapsed after going upstairs to Bailie's room at their home in Millom, Cumbria, to tell him to turn off his Xbox games console.

"At first I thought Dad was being silly," recalls Bailie.  "But I knew something was wrong when he turned red and was struggling to breathe."

The youngster rushed downstairs and dialled 999, then calmly gave the necessary information to the emergency operator.

He then unlocked the front door ready for the paramedics before dashing back upstairs to tend to his dad.

He says, "I knew I had to stay calm for Dad.  There was no one else home, so it was down to me to do something.  I had to help him."

He stayed on the phone to the operator and continued to give updates on his dad's condition.

He also helped by clearing his airways and making him comfortable.

But after a few minutes Chris stopped breathing.

With the ambulance still on its way, it was down to Bailie to perform CPR in the vital minutes before medics arrived.

He says: "It was quite hard, but I kept going because I didn't want my Dad to die on me."

The paramedics arrived after six minutes, at which point they used a defibrillator to restart Chris's heart.

While this was happening, Bailie calmly began calling family members to tell them what had happened.

A spokesman for North West Ambulance Service said: "After six minutes without CPR, there is a 99.9 per cent chance of death.

"For a 12-year-old boy to have the nerve to perform CPR of such a high standard to his own father is highly commendable.  His actions undoubtedly gave us a chance to shock and consequently revive his father."

Chris spent weeks in hospital and underwent a quadruple bypass.  He has also had a mini heart defibrillator fitted to his heart.

He is still coming to terms with what happened, but is now back at home.

He says: "It doesn't surprise me that Bailie could have coped so well.  He's very level headed and takes everything in his stride.

"But I am immensely proud of him.  He gave me my life.

"I wouldn't be here if it wasn't for him and that's a debt that can never be repaid."

Maureen adds: "If Bailie hadn't reacted in such a sensible and responsible way we could have lost Chris and that doesn't bear thinking about.

"For him to realise something was wrong and to deal with it all by himself is just amazing.

"He could have frozen with fear and just stood there and screamed, but he didn't.

To react so well in a situation that would be terrifying for an adult shows maturity beyond his years, as well as extraordinary courage.  Bailie's bravery saved his dad's life.  What an incredible boy.The Judges

View the embedded image gallery online at:
https://prideofbritain.com/history/2001/bailie-kershaw#sigProId45eeec87de
Tagged under