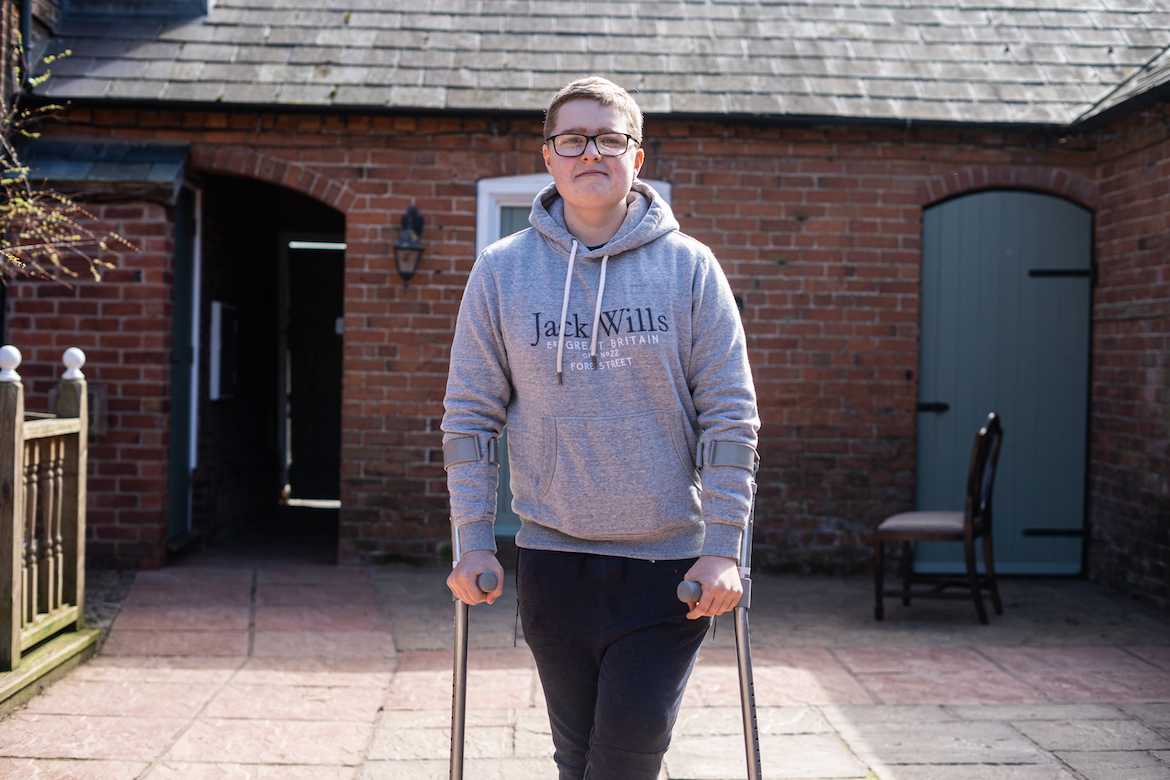 Teenager broke through the pain barrier to complete a charity walk on crutches to thank paramedics who saved his life.

AFTER the swift actions of a Midlands Air Ambulance crew saved his life following a horrific tractor accident, Henry Carpenter didn’t just say thank you.
The teenager showed his gratitude by taking on an epic fundraising challenge that will pay for the emergency medics to carry out 20 lifesaving missions, in the air and on the ground.
Despite being in constant pain from his injuries and awaiting a hip replacement, the determined schoolboy walked 54 miles on crutches in freezing conditions in aid of the emergency service.
His astonishing feat of endurance has raised more than £9,000, and made him our Young Fundraiser of the Year at the Birmingham Live Pride of Birmingham Awards, in partnership with TSB.
Henry, 15, said: “I only planned to raise a small amount but seeing the total go up and up spurred me on.”
Henry’s accident happened when he was helping with lambing season on the family farm near Bromyard, Herefordshire, in April 2020. He was driving to a field alone on a tractor when he got down to open a gate and accidentally knocked the gear stick.
The tractor went forward, dragging Henry underneath the trailer for three metres and leaving him with a fractured pelvis and dislocated hip.
His injuries could have been even worse but luckily the tractor stalled in a hedge and came to a stop.
Without a phone, Henry had to call for help and his cries were eventually heard by a farm worker, who dialled 999.
The nearest hospital was at least a half hour drive away, so the air ambulance was dispatched along with a doctor based locally. After urgent lifesaving care at the scene, Henry was flown to Birmingham Children’s Hospital.
Midlands Air Ambulance critical care paramedic Karen Baker said: “He had life threatening injuries as a broken pelvis can lead to a catastrophic internal bleed - and was in terrible pain.
“This would be difficult for an adult to cope with, but for a child it’s even more distressing. Even then, he showed bravery and we knew there was something special about him.”
Henry spent a week in hospital at the height of the first wave of the pandemic before continuing his recovery at home.
He was laid up for 12 weeks followed by a further six weeks in a wheelchair and then progressed to crutches. The accident also left him with Post Traumatic Stress Disorder and in need of counselling.
He suffered a further blow last September when he developed a limp and severe pain, a sign that the accident had ripped the blood vessels in his hip.
Henry said: “I ended up bedridden. It turned out my hip socket was dying. They had always said it was a possibility but I didn't think much of it to start with.
“Doctors said I needed a hip replacement and it will probably last 20 to 30 years then I'll need another one. It gets me down sometimes but I know there are people a lot worse off than me."
Despite his own struggles, Henry felt a strong desire to give back to the people who had saved his life.
He said: “They helped me a lot when I had my accident, especially getting me to hospital so quickly. I felt like I owed them and I was sitting around doing nothing when their Air30 fundraising challenge popped up on my Facebook.
“I thought: Why not? “It shocked me that this service isn’t government funded. Everyone in the agricultural and horse communities know how precious it is and our neighbours have also used them.”
For 30 days, Henry went out in all weathers, building up his stamina as he took 40 minutes to manage a single mile on crutches. On the final day, he did a full six miles to hit his 54-mile target, which is the distance between two of the service’s air bases.
He added: “Some days were more painful than others but I did a lot of stretching and the walking helped to strengthen my back ahead of my surgery.
His mum Emma said: “I was worried how he would cope mentally but he set a schedule and didn’t miss a day. There was snow sometimes and he came back frozen.
“He had to dig deep and showed a resilience that none of us really knew was there. This was all his idea – we found out when he put it on Facebook.
“On the final day in February he did six miles over four hours because he wanted it to be difficult, so that he deserved to be sponsored.
“His friends and the community got behind him, walking behind in a socially distanced way and coming out with donations.
“Henry has a real connection with the air ambulance. I think he was really scared and totally believes he might not have survived without them.
“On the anniversary we cracked open some champagne to celebrate that he was still with us and still upright, although he has a long way to go.”
Henry’s hip replacement is scheduled for June and he will need more physio to get back on his feet, but he plans to raise more money for the air ambulance as soon as he is able.
He is also giving talks about his mental health struggles to other teens, recently speaking to a few hundred people alongside his mum in an online seminar.
His proud mum said despite the award, her courageous son “still doesn’t think he’s done anything special”.
“He just thinks he walked and raised some money to say thank you,” she said. “He doesn’t realise not everyone would do that.
“In some ways this has been the making of him and got him out of a mental hole. He was stuck indoors and homeschooling – this gave him routine and purpose.
“He is an amazing character. We are very proud and very lucky to still have him.”