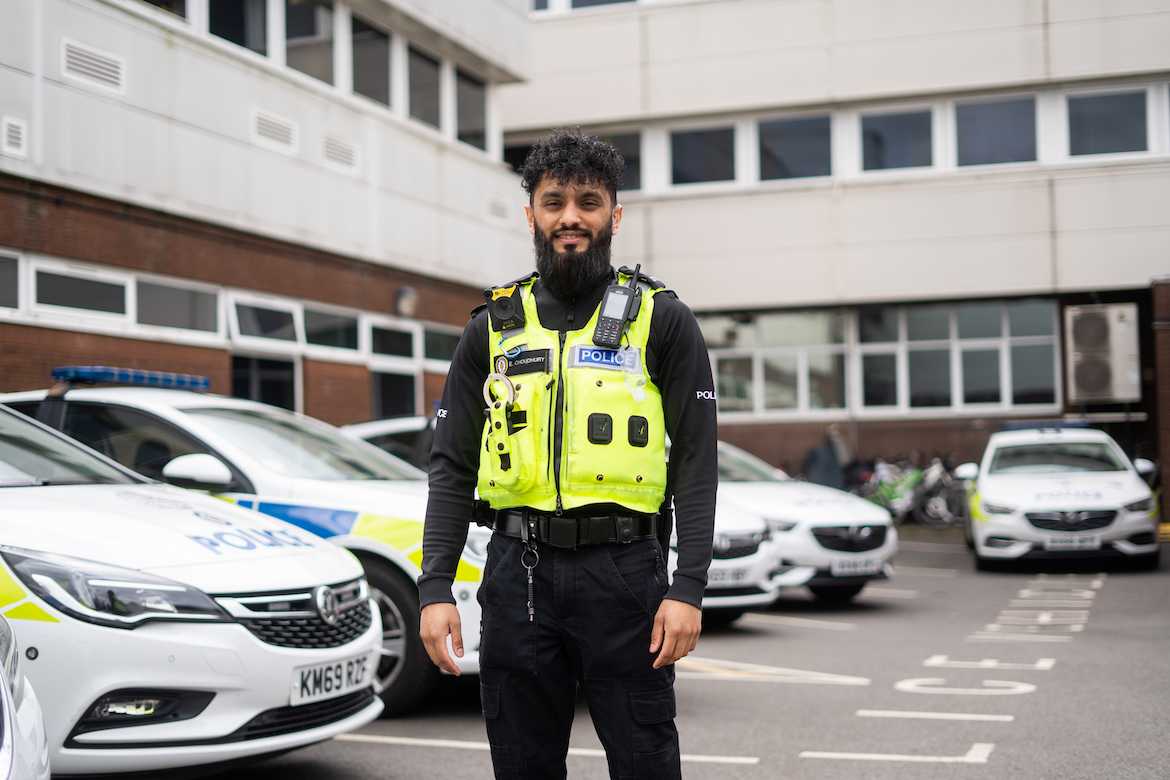 From the outside, Emad Choudhury’s two roles - as an Imam and a frontline police officer -  may seem very different.

But whether he is patrolling the streets or leading Friday prayers, Emad’s motivation is the same. He is driven by his faith and a desire to serve the community, help the people around him and give young people a brighter future.

He says: “The values I was brought up with at the mosque mean that we’ve always been pushed to do something that was public serving or public facing. So there has always been that element of helping people that has been at the forefront of my mind.

“Joining the police was a seamless change. It was a role that still allowed me to be me and add a skill set rather than change into a completely different person. That was important as I am still a serving Imam. Policing was one of the few roles that served the same values to my faith and let me continue who I was and who I wanted to be while putting me in a position where I can influence people.”

Emad’s unique contribution has been recognised with the Emergency Services Award at the Birmingham Live Pride of Birmingham Awards, in partnership with TSB.

The boxing fan was surprised with his trophy at Stechford Police Station by Olympic champion fighter Luke Campbell.

“Luke popped out from beside the car and I thought, what the heck?,” recalls Emad. “I immediately recognised him, I’m a huge fan. But after that it was all a bit of a blur. It meant a lot that he was there. I managed to grab a cheeky selfie before he left.

“To know that it’s working is the best feeling.”

There was a second ring-related surprise for Emad when he met Pride of Birmingham host Kym Marsh at the Belfry, and she introduced a special message from former world champion Amir Khan.

It is just one of the magical moments you can see when the show premieres on YouTube on Thursday.

“It’s something I’m really passionate about,” says Emad. “Too many children, including some from my home in Sparkbrook, are being killed and lives ruined through knife crime.

“I know these communities, I live here and I know how it works. I’m trying to use my access to people here to prevent more lost lives and heartache.”

Emad joined the force in 2018. Following spells with the Edgbaston neighbourhood team and a response shift attending emergency calls, he was assigned to a role with the Project Guardian team - a specialist unit tasked with tackling knife crime and youth violence. In January he moved into an investigative role.

He says: “Project Guardian was a cause close to my heart.  I very much have a soft spot for young people and I feel they are a young nation that we are losing. So it was a perfect way for me to do something active and reach out to a generation I was passionate about.”

Emad says he was very fortunate to have positive influences around him as a youngster, and he wants to give today’s teenagers similar benefits.

He recalls: “I grew up in inner city Birmingham, in Sparkbrook, one of the worst crime hotspots in the city. Young people are massively deprived in that area and lacking in good role models and opportunities. If you want to create good influences you need to become one yourself. I felt it was my moral and religious obligation to do something about it.

“One lad once said to me that he could name more prisons than youth centres. That really hit home. We all talk about investing in young people but you actually need to go and do it.”

In 2019 Emad and a team ran a programme mentoring 20 young people called Empowering Futures. The youngsters came from every walk of life, and not just the Muslim community.

The premise was to steer those who were at risk away from violence.

“All 20 left the programme with 100% attendance,” says Emad proudly. “That stuck with me as it showed that people could be reached out to. And beyond that at least a quarter started building their CVs and looking for jobs within the police and fire service.

“It showed that you could change a mentality just by showing them love and giving them a safe space. I am literally just waiting for this lockdown to finish so we can get back to doing more of the same.”

Emad is motivated by a desire to make Birmingham the best place possible for young people to grow up.

He says: “I hope to be blessed with children one day and I want them to grow up safe in the city I love. I will inspire all my children to know that everyone has got the capacity and capability to achieve as long as you are willing to work hard.”